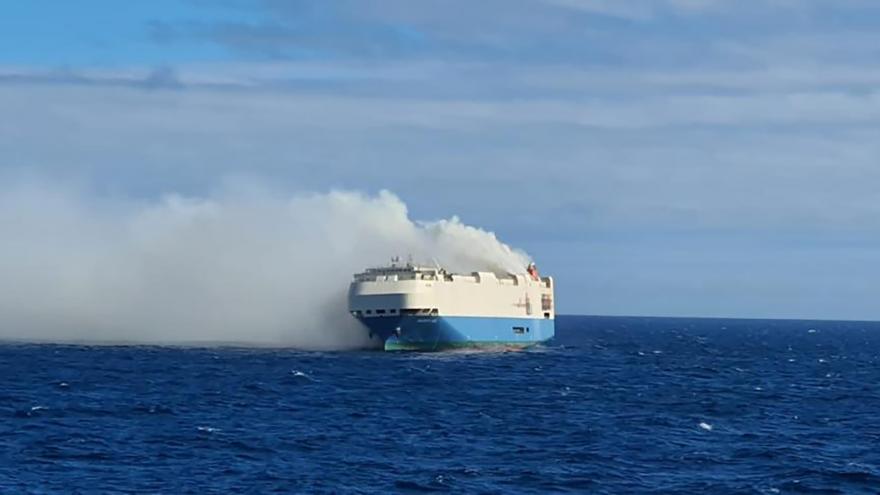 (CNN) -- An abandoned cargo ship packed with cars is adrift in the Atlantic Ocean, after a rapidly-spreading fire on board forced the crew to escape.

The 656 foot-long Felicity Ace roll-on/roll-off car-carrying ship caught fire in the North Atlantic on Wednesday as it carried cargo, including Porsches and Volkswagens, from Emden, Germany to Davisville, Rhode Island. At the time of the fire's outbreak, the ship was sailing 90 nautical miles southwest of Portugal's Azores, according to a statement on Wednesday by the Portuguese Navy.

After the fire broke out in the cargo hold, it spread and forced all 22 crew members to abandon ship. According to another statement by the Portuguese Navy, the crew was safely picked up and taken to a local hotel, with the rescue coordinated by the Ponta Delgada Maritime Search and Rescue Coordination Center. There has been no noticeable source of pollution from the fire, according to the statement.

The ship's owners have arranged for a tow as it continues to burn. Registered to Panama, the Felicity Alice is operated by Japanese shipping line Mitsui O.S.K. Lines (MOL). MOL has not responded to request for comment.

Porsche confirmed to CNN Business that a number of its cars were among the cargo and that customers with cars on board the burning ship are being contacted by their dealers.

"While it remains too early to confirm what occurred and next steps, we are -- along with our colleagues at Porsche AG -- supporting our customers and our dealers as best we can to find solutions," said Angus Fitton, Vice President of PR at Porsche Cars North America. "We are in contact with the shipping company and the details of the cars on board are now known."

Expectant Porsche owners with cars on board like journalist and host Matt Farah, who said he had a 2022 Porsche Boxster Spyder awaiting delivery, have already started receiving word from dealerships about the status of their vehicles.

"The dealer confirmed that my car, along with at least a dozen other vehicles they were expecting, is on that boat," Farah said. "They had no further information for me beyond confirming my car was on the boat, and said that as soon as Porsche Cars North America has a plan of any kind with how to proceed, that they would share the plans with me."

Volkswagen alsohas customers awaiting vehicles on the burning cargo ship. "We are aware of an incident involving a third-party cargo ship transporting Volkswagen Group vehicles across the Atlantic. The vessel was on its way to North America," said Dirk Ameer, a Volkswagen spokesperson. "At this time, we are not aware of any injuries. We are in contact with the shipping company to get more information about the incident."

The Felicity Ace can carry over 17,000 metric tons of cargo, according to the Associated Press, with possibly thousands of cars on board . The Portugese Navy said that as of Thursday, the fire is ongoing, and an ocean patrol vessel remains on site to monitor the abandoned ship.