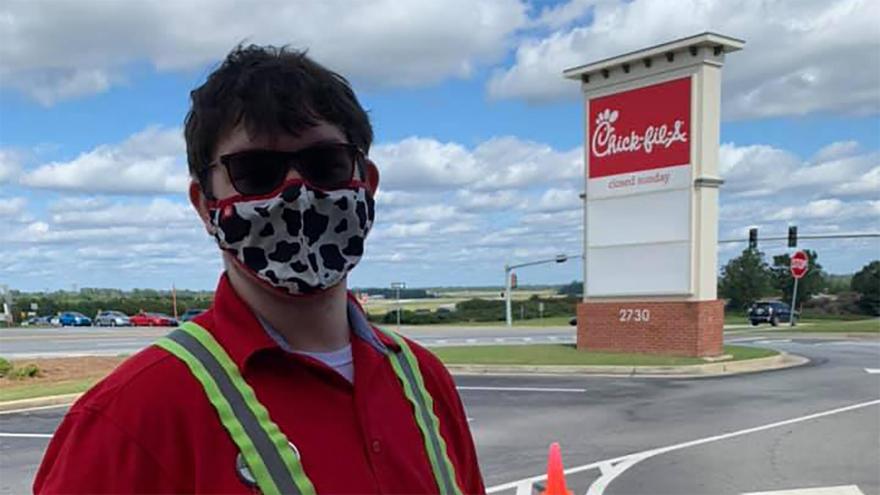 Zack Kokenzie helped save a child from choking at a Chick-fil-A in Georgia.

(CNN) -- A Chick-fil-A employee in Georgia saved a child from a life-threatening situation in the drive-thru line, shortly after the lunch rush on Monday.

Zack "Cowboy" Kokenzie rescued a choking child at a Chick-fil-A in Columbus, after he heard some alarming cries coming from a vehicle in the drive-thru line, the restaurant said in a statement posted to Facebook.

Kokenzie, an Eagle Scout and CPR certified, followed the panicked calls and observed what seemed to be a father and another customer attempting to free a child in the backseat of a vehicle, according to the statement. The seat belt appeared to be wrapped around the child's windpipe, said the restaurant.

A coworker handed Kokenzie a pair of scissors through the drive-thru window and he walked to the rear of the vehicle, cutting the seat belt in seconds to free the child, according to the restaurant.

"This could have been far worse, but Zack and others were in the right place, with the right training and the right attitude to potentially save the life of one of our customers," said Alex Vann, the restaurant's owner and operator. "We are glad everyone is all right."

Known as "Cowboy" after a recent incident where he was almost bucked off a horse, Kokenzie has shown an ability to remain calm in dire situations, the restaurant's post read.

This is not the first time a Georgia Chick-fil-A employee has saved a child from choking in the drive-thru line.

Last year, a 19-year-old Flowery Branch Chick-fil-A manger, Logan Simmons, was called a hero after he leaped through the drive-thru window to save a boy who was choking.

Surveillance footage showed Simmons climbing through the window and running to the car where a 6-year-old boy was in the rear seat.

In this incident, a seatbelt was also wrapped around the child's neck, causing him to choke. Simmons rescued the boy by using his pocketknife to cut him free.

Simmons said Chick-fil-A did not train him on how to save a life, but he believes he is able to handle high stress situations. In the moment, his instincts spurred him into action, he said.