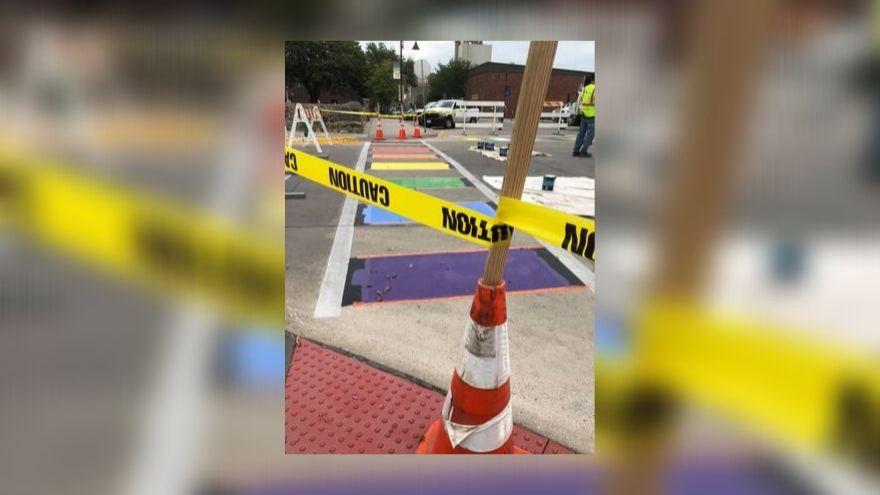 The city of Ames, Iowa, introduced new, inclusive crosswalks at the intersection of Fifth Street and Douglas Avenue on September 4. Source: City of Ames
By Harmeet Kaur, CNN

(CNN) -- When the city of Ames, Iowa, installed rainbow-colored crosswalks at a downtown intersection, it wanted to signal that it was welcoming and inclusive to people of all gender identities, sexualities and races.

So when the federal government threw the city a roadblock, they decided to ignore it.

In a letter dated September 5, the Federal Highway Administration (FHWA), a division of the US Department of Transportation, requested that the colorful crosswalks be removed because they didn't comply with federal traffic control standards.

According to federal rules, crosswalks can only use white paint.

"Crosswalk art has a potential to compromise pedestrian and motorist safety by interfering with, detracting from, or obscuring official traffic control devices. The art can also encourage road users, especially bicycles and pedestrians, to directly participate in the design, loiter in the street, or give reason to not vacate the street in an expedient or predictable manner," the FHWA wrote in a letter to Ames City Manager Steve Schainker.

"It also creates confusion for motorists, pedestrians, and other jurisdictions who may see these markings and install similar crosswalk treatments in their cities. Allowing a non-compliant pavement marking to remain in place presents a liability concern for the City of Ames in the event of a pedestrian/vehicle or vehicle/vehicle collision," the letter continued.

But the city of Ames wasn't buying it.

City Attorney Mark O. Lambert sent a memo addressed to the Ames mayor and city council, outlining his own interpretation of the situation.

The FHWA doesn't appear to have jurisdiction over the roads where the crosswalk is, Lambert wrote, since the streets are not part of a federal highway and receive no federal funding. Instead, he said it should be up to the state of Iowa to decide whether the federal traffic control standards were enforced on its streets.

"With the system of federalism in the United States, the federal government does not have jurisdiction over everything," Lambert stated in the letter.

He also pointed out some technicalities. The FHWA hadn't said that they would impose any penalties for not complying with the rules, and the agency had only requested that the city remove its colored crosswalk -- they hadn't demanded it.

Members of the Ames City Council discussed the issue at a meeting last Tuesday, and ultimately came to a decision. They would do nothing.

"My only question is, do we need to do anything?" council member Chris Nelson asked at the meeting, according to the Ames Tribune. "Can we just accept the letter and say thank you?"