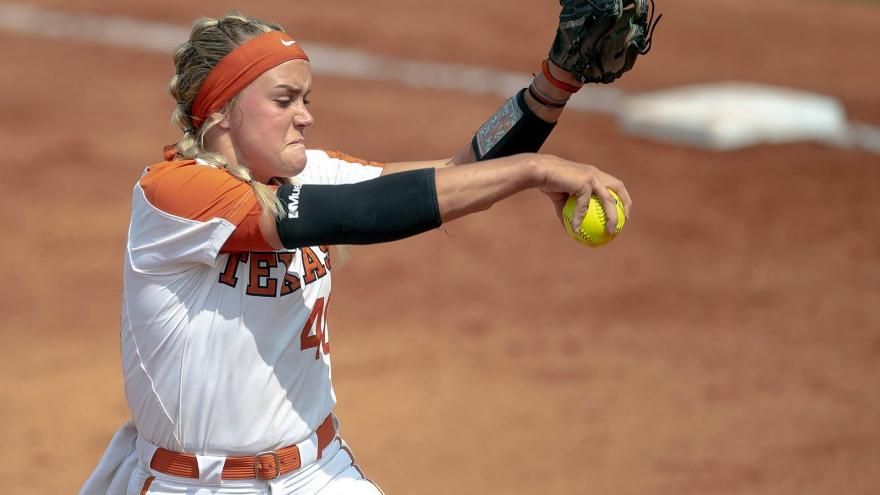 (CNN) -- A pitcher for the University of Texas softball team was taken to a hospital Friday after a ball thrown by her own teammate struck her in the face, the team said on Twitter.

Miranda Elish was "doing well and was taken to the ER as a precaution," the tweet said. Details of the injury were not available.

The unusual incident happened in the second inning of a big game, with Texas playing the University of Alabama during a NCAA Division I Super Regional game in Tuscaloosa.

An Alabama player bunted, and Texas catcher Mary Iakopo picked up the ball and threw toward second base, hoping to put out the runner from first, video showed.

But the catcher's throw hit Elish squarely in the face, and she collapsed to the ground, video showed.

Play was stopped, and coaches and teammates gathered around Elish in the middle of the field. The fans gave a standing ovation as she was helped off the field.

Pitchers sometimes crouch when a catcher throws to second base to reduce the chances of being struck by a ball. In the split-second action of the Texas-Alabama game, Elish was in position to see the umpire call a dead ball (because the batter had put her foot outside the batter's box) as the catcher barehanded the ball and was in motion to throw to second, video from the game showed.

Texas was trailing 3-0 when the injury occurred but rallied to win 7-5 with the help of a home run by Iakopo.

One softball player tweeting support for Elish was Ashlee Swindle, an Auburn pitcher injured May 17 when a line drive hit off the bat of a Colorado State player struck Swindle in the face during a tournament game in Tucson, Arizona.

Swindle was taken to a hospital, diagnosed with a concussion and released to the team doctors, the Auburn softball program tweeted.