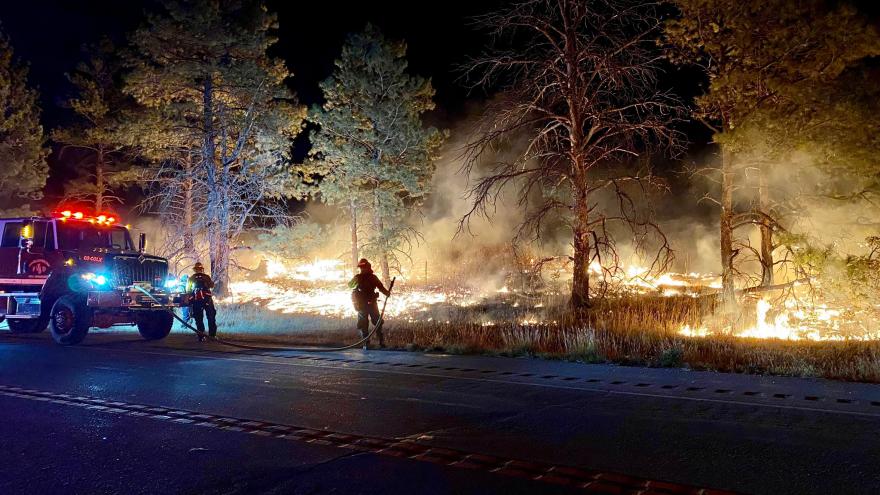 From Colorado Springs Fire Department/Twitter-The Wild Horse Fire in Colorado jumped a highway to burn in a training area at Fort Carson Army base.

(CNN) -- Firefighters are battling a wildfire that is burning in a training area of a Colorado Army base.

The blaze, named the Wild Horse Fire, is burning at Fort Carson in Colorado Springs. It's already burned more than 200 acres, base officials said.

The Wild Horse Fire doesn't currently threaten any people or property on the base, Fort Carson officials said in a statement on Sunday.

The fire didn't start on the base. Fort Carson fire personnel believe the fire started on the west side of Colorado Highway 115 and, due to high winds, jumped the highway. Now it's burning in Fort Carson on the other side of the highway. Fort Carson covers 140,000 acres.

Fort Carson will be using UH-60 Black Hawk utility helicopters to prevent it from jumping back to the side it started on, Fort Carson Public Affairs Office said in a release Monday.

A portion of Highway 115 will be partially closed for about three hours Monday afternoon to allow the helicopters to battle the blaze, according to the release.

Winds have been high across the front range Sunday, with gusts between 50 to 80 mph recorded in the area, according to the National Weather Service's Boulder office.

The Wild Horse Fire is one of the smallest and newest of several wildfires currently burning in Colorado. The largest, the Cameron Peak Fire, has burned more than 130,000 acres and is located just north of Rocky Mountain National Park. The Williams Fork Fire, a human-caused blaze that has scorched more than 14,000 acres, is about 100 miles west of Denver.

Colorado's dry climate means the state is at a high risk of wildfires year-round. Fires have been especially prevalent over the past few weeks, as Colorado is in "various stages of drought," according to the state. They're usually triggered by lightning or, in more recent cases, human activity -- fireworks and campfires are both causes.

The largest fire in the state's history, the Pine Gulch Fire, was finally contained in September after burning for almost two months. It burned around 139,000 acres.