A comedian handed out $13,000 to hospitality workers at a New York bar 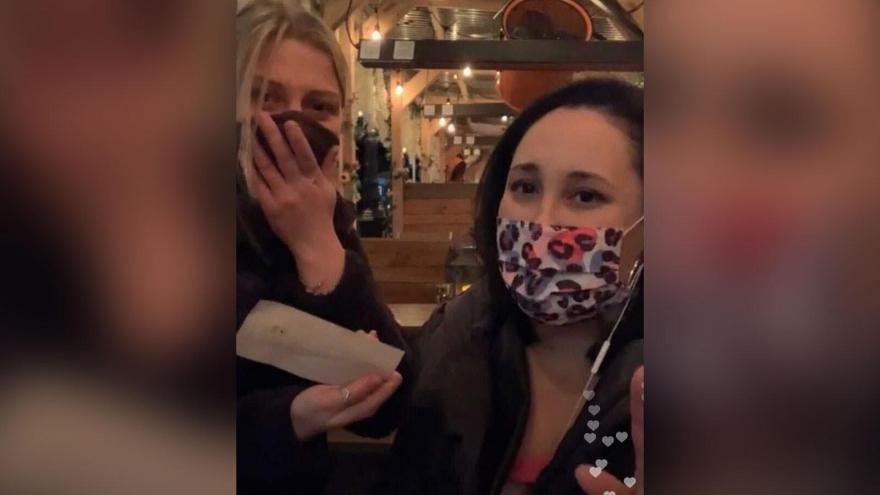 Comedian Robyn Schall gives $13,000 in tips -- all donations from her social media followers -- to a handful of employees at Lily's Cocktail and Wine on February 17.

(CNN) -- A New York City waitstaff received a surprise gift last week after a comedian handed out thousands of dollars raised by her online fans.

Robyn Schall gave $13,000 in tips -- all donations from her social media followers -- to a handful of employees at Lily's Cocktail and Wine last Thursday.

"My amazing fans came together & helped give unsuspecting people a giant pandemic valentine," Schall wrote in an Instagram post. "I am grateful to be the one that handed over the checks but the credit must go to the thousands of people who donated."

Schall said when she planned a live stream of a "virtual date" to her 140,000 social media followers, she asked them to donate anything they could, so she could surprise the waitstaff with a generous tip.

"I was just blown away with how many people started giving $1, $2, $5 whatever you could think to give, and it was just unbelievable," she told CNN.

Comedy clubs in New York have been closed for a year now due to the pandemic, Schall said. As a result, her friends who are performers, waitresses, and bartenders, have been "hurting."

"As New Yorker when you walk down the street and you see these restaurants starting to ford off, and it just hurts personally," she said. "I just know they're hurting, so I felt it was like who I want to help."

In a video shared on Instagram, the staff appears overwhelmed and shocked by the act of kindness.

"I really need this," said a cook, holding back tears as he received his check.

Schall said she used the remaining donations to pick up the tab of a couple sitting at the table behind her and to also tip the staff at Big Nick's Pizzeria.

"It felt like such a great sense of like community and just people from around the world wanting to do an act of kindness," said Schall.

On Sunday, Schall was able to pay it forward again thanks to more donations from followers.

This time, she tipped the staff at a New York bakery called Make My Cake.

"To my followers, you have made this the best freakin Valentine's Day ever!!! Thank you!!!" wrote Schall in a post to Instagram.

Schall said she plans to continue to use her platform to pay it forward in the future.

"There are two things I want to do, and that makes people laugh and make people feel good," she said. "So, If I can do that, I'm happy."