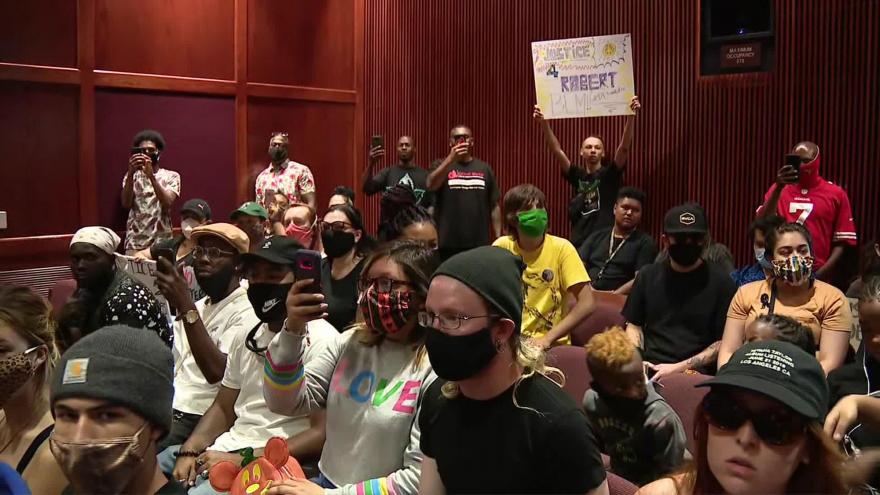 Palmdale residents attend a meeting on the death of 24-year-old Robert Fuller.

(CNN) -- Dozens of people gathered at Palmdale city council chambers Friday as officials held a press conference on the death of a 24-year-old black man who was found hanging from a tree in northern Los Angeles County.

Shortly after 3:30 a.m. Monday, a passerby noticed a man, later identified as Robert L. Fuller, hanging from a tree in Palmdale, California. Fire department personnel who responded to the scene determined he was dead, the Los Angeles County Sheriff's Department said in a statement.

Palmdale city described it as "an alleged death by suicide."

"Sadly, it is not the first such incident since the COVID-19 pandemic began," the city said in a statement that included information on resources for mental health. "The city remains committed to addressing mental health issues during these difficult times. We are in this together."

When a spokesperson for the sheriff's department announced the preliminary findings of Fuller's death during the news conference, outraged crowds demanded an investigation.

"We're working hard to try to figure out exactly what happened," Palmdale Mayor Steven D. Hofbauer shouted as he tried to calm people down.

Attendees asked for camera footage of the incident, but a city official said there's none. Throughout the news conference, officials repeatedly called it an ongoing investigation, saying a full autopsy is underway.

After the press conference, the city issued a statement saying it understands the community's call for a full investigation into the death.

"We will fully cooperate with the Sheriff's Department, the Los Angeles County's Coroner's Offices, and any and all investigative agencies looking into the matter," Hofbauer said.

"We are awaiting all available details surrounding this tragedy. In addition, we are working with local community leaders to increase the dialogue on how we can best work together and build a safer and more inclusive community," he added.

A full autopsy is expected to be conducted in the immediate future, the Sheriff's Department said.

Investigators have been in contact with Fuller's family members and are continuing their investigation into the circumstances surrounding his death, according to the Los Angeles County Sheriff's Department.

Palmdale city manager J.J. Murphy said he would be speaking to Fuller's sister after the news conference. CNN is attempting to reach out to Fuller's family members.

Palmdale is about 60 miles from Los Angeles.