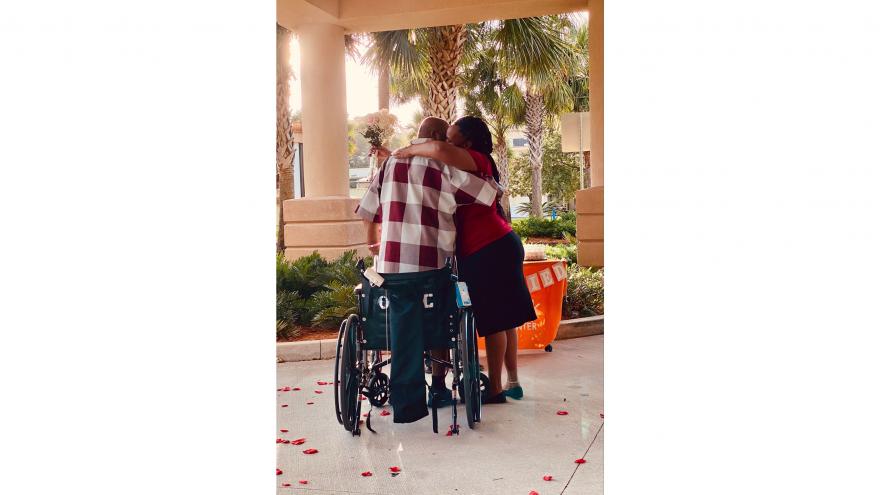 (CNN) -- When Antionette Brown first saw Henry Bell at a nightclub 14 years ago, she knew he was the one. Although they never married, they commonly referred to each other as husband and wife during that span.

Nothing tore them apart -- not even when Bell nearly died after being hospitalized with Covid-19 for nearly two months.

So one day before he was released from HCA Healthcare's Orange Park Medical Center in Florida, they finally decided to tie the knot in the hospital parking lot surrounded by the health care workers who helped save Bell's life.

"It was wonderful," Brown, 48, told CNN. "Me and my husband went home to start a new life, and thank God for life and all the staff and doctors that made this happen. It will be a day to remember forever."

Bell arrived at the hospital on September 13 after experiencing coronavirus symptoms and was immediately placed on a ventilator. After weeks in the ICU, Brown was forced to decide between placing Bell in hospice or giving him a tracheostomy, a procedure that involves creating an opening in the neck to place a tube into a person's windpipe so they can breathe.

When doctors momentarily stopped sedating him so he could help make the decision by squeezing once for a tracheostomy or twice for no, Bell says he didn't have to think about it for a second.

Bell says he was sedated for most of the time he was in the hospital. He has no recollection of what happened or what he went through. But he does remember that the moment he woke up, he wanted to make Brown his wife.

"When I was aware and I saw her, all I wanted to do was marry her," he said. "I could not talk, so I acted as if I was putting a ring to propose to her."

The couple married on November 5. Doctors and nurses helped Bell get to the alter, where he was able to stand for the longest time since being hospitalized.

"We are touched and honored that Henry and Antionette wanted our caregivers present for their wedding," said Dr. Bradley Shumaker, chief medical officer at Orange Park.

"Throughout the pandemic, our colleagues have done tremendous work on the frontlines," he said. "Witnessing Henry's remarkable recovery and being a part of this special moment was a great reminder of why they do what they do every day. We wish them many more years of happiness, good health and a speedy recovery."

"It was so hard and painful. There was a real emptiness in my life," Brown said.

Throughout the family's ordeal, as they were unable to see or touch Bell, the doctors and nurses who cared for him ended up becoming part of their family, Brown says.

"There was no better place to get married," Brown said. "The staff was wonderful. They had become my family and I wanted family there. I was more than happy for them to be there."

For the health care workers who took care of Bell, they didn't need a wedding to celebrate.

"It really gave us a sense of accomplishment that all our efforts, despite all the tragedy that we've faced over the past eight months, have had some amazing and positive outcomes," said Dr. Payam Nabizadeh, Bell's doctor.

"I was rounding when I received a text regarding the wedding plan and literally became teary eyed," Nabizadeh said. "I watched him suffer for weeks, and for them to share such a personal moment with us, well that says everything."

While the family is happy to be reunited, they are now using their story to urge people to wear masks, stay home and take the coronavirus seriously.

"I am telling my story in hopes there are move lives saved and there are more happy endings," Bell said. "Please wear a mask and wash hands more often. Please keep your distance. This is a very serious infection."