Couple gets married in the Philippines while volcano erupts behind them 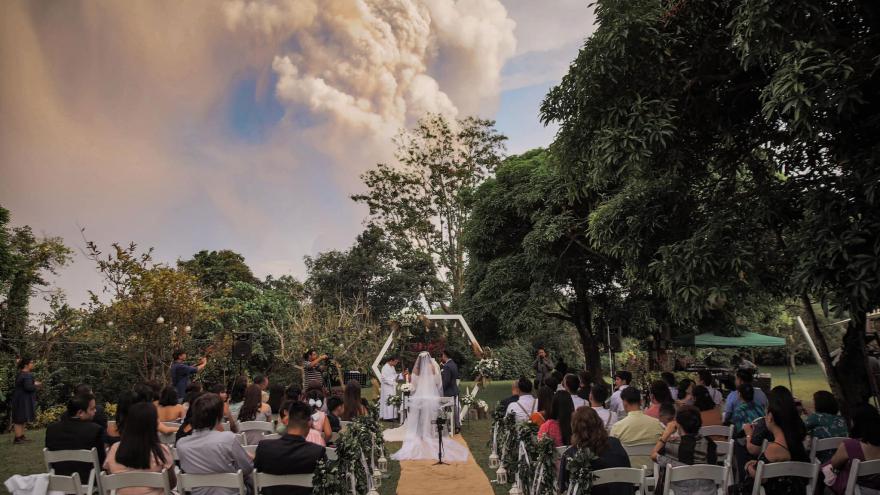 (CNN) -- A couple in the Philippines went ahead with their wedding Sunday despite the eruption of a volcano spewing ash into the sky behind them.

Chino and Kat Vaflor were tying the knot at a venue 10 miles from the Taal Volcano when wedding photographer Randolf Evan captured dramatic shots of the couple with the ash plume seemingly overhead.

The Taal Volcano, about 37 miles south of Manila on the island of Luzon, erupted in the afternoon, forcing residents to evacuate as experts warned that another "hazardous explosive eruption" is possible.

"We were actually nervous because while working we kept on checking social media for updates on the volcanic eruption. So we were actually aware of the warnings and escalating levels that was being announced real time," Evan told CNN.

"We also discussed discreetly among ourselves what we should do when worst comes to worst."

Evan said everyone at the wedding at Savanna Farm Tagaytay by Solange stayed "calm" as the couple said "I do."

The venue later posted a picture of the couple at the altar, swirling clouds in the distance, and wrote, "The wedding continues!"

The Philippine Institute of Volcanology and Seismology reported that the volcano exhibited a "fast escalation" in volcanic activity. Continuous eruption generated ash plumes 6 to 9 miles above the crater, it said.

The institute urged the evacuation of Taal Volcano island and several nearby towns.

The agency raised its alert status to indicate the possibility of a hazardous eruption with lava within hours to days.