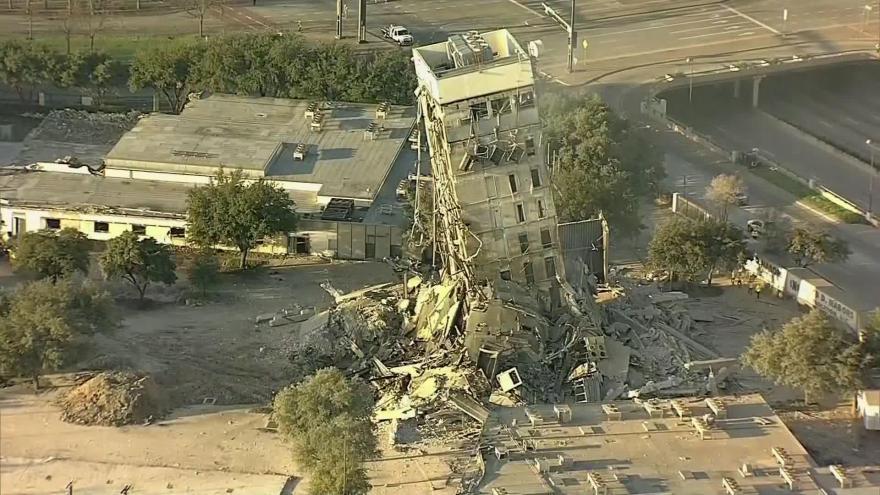 Texans have dubbed a high-rise office building the "Leaning Tower of Dallas" after it failed to come down during an implosion.

(CNN) -- Texans have dubbed a high-rise office building the "Leaning Tower of Dallas" after it failed to come down during an implosion on Sunday.

The strategically placed explosives went off without a hitch. Each side of the 11-story building on the corner of North Central Expressway and Haskell Avenue came crashing down.

But the center of the building refused to come down, and stayed standing at a slight angle.

"You could see the building fall down and then that tower there just kind of stopped," one witness told CNN affiliate KTVT. "Everybody went, 'Oh no,' and there it is. It's still sitting there. Amazing."

A spokesperson for the demolition company, Lloyd D. Nabors Demolition, said the remaining structure poses no threat to surrounding buildings or pedestrians.

"As with many demolitions, the core and elevator shafts require additional demolition measures, and we will proceed with conventional demolition efforts over the course of the week utilizing a crane and wrecking ball," a spokesperson with Lloyd D. Nabors Demolition told KTVT.

After the building is successfully brought down, KTVT says the site will eventually become part of a new 27-acre development with high-rise residential and office spaces, hotels, restaurants, a park and entertainment.