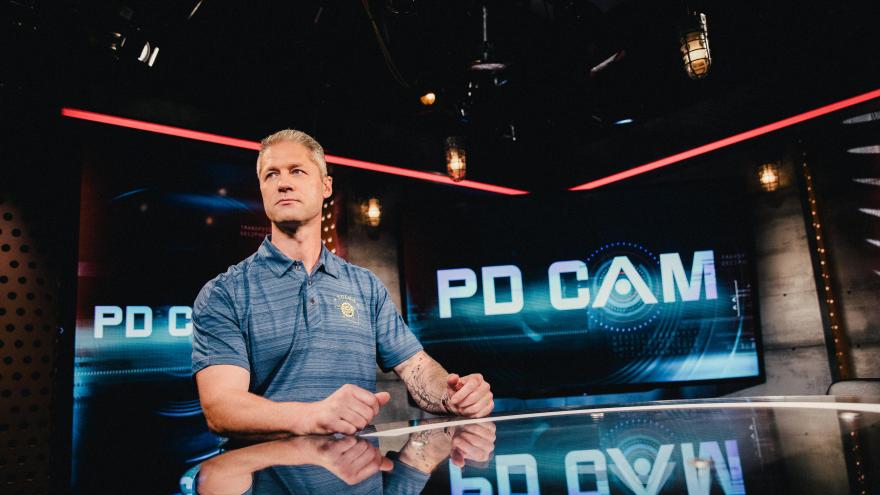 Sgt. Sean \"Sticks\" Larkin of the Tulsa Police Department hosts \'Live PD Presents: PD Cam.\' A&E has canceled the police reality series as the debate over the role of police in the US intensifies. Credit: Patrick T. Fallon/A&E
By Scottie Andrew, CNN

(CNN) -- A&E has canceled the police reality series "Live PD" as the debate over the role of police in the US intensifies.

It's the second police series to get yanked from schedules this week -- first came "Cops," the famous ride-along program that took viewers on wild police chases for over 30 years.

Per the show's description from A&E, "Live PD" gave viewers "unfettered and unfiltered live access inside a variety of the country's busiest police forces, both urban and rural, and the communities they patrol on a typical night."

"This is a critical time in our nation's history and we have made the decision to cease production on Live PD," A&E said in a statement to CNN. "Going forward, we will determine if there is a clear pathway to tell the stories of both the community and the police officers whose role it is to serve them."

The network will meet with community and civil rights leaders and police departments to determine the series' future, A&E said.

Dan Abrams, host of "Live PD" and founder of the media and politics commentary site Mediaite, said he was "shocked and beyond disappointed" by the series' cancellation.

"To the loyal #LivePDNation please know I, we, did everything we could to fight for you, and for our continuing effort at transparency in policing," he tweeted. "I was convinced the show would go on."

The public perception of police has shifted in the weeks since George Floyd's death. Protests erupted nationwide in May after Floyd, Breonna Taylor and other black Americans died at the hands of police. Now, demonstrators are demanding justice for the dead and accountability on the part of police.

READ MORE: Analysis: What 'Law & Order'-type crime shows can (and can't) tell us about views of policing

But "cop shows" are a hallmark of American TV. Reality shows like "Cops" and acclaimed dramas like "Law and Order," "NYPD Blue" and more recent programs like "Brooklyn 99" and "Blue Bloods" all center around police departments. Many of them enjoy critical acclaim and extended runs.

Now, with public support for police dwindling, there may be less room for law enforcement-focused series on TV schedules.