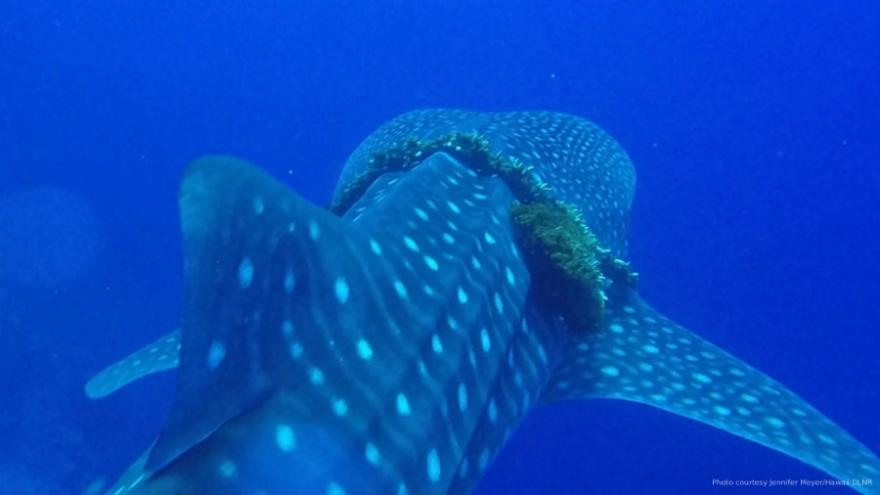 (CNN) -- A family snorkeling in Hawaii managed to free a 20-foot whale shark from a thick, heavy piece of fishing line that was looped around its head and had been digging into its flesh for weeks.

The Kawelo family was snorkeling off Kaunolu, Lanai, on July 29 when they saw the whale shark swimming. Kapua Kawelo and her husband, Joby Rohrer, are both biologists and realized it was in trouble.

"We waited a long time to consider what our responsibility was, what our kuleana was," Kawelo told CNN affiliate KHNL, using a Hawaiian word for "a reciprocal relationship between the person who is responsible and the thing which they are responsible for."

"We know that people don't necessarily encourage this type of thing, but both of us are biologists," she said. "We felt like we were, sort of, in tune with what the animal was doing and maybe we were meant to be there."

So, they decided to help -- not realizing the juvenile whale shark, which first had been spotted on July 11, had been growing emaciated as the entanglement threatened its life, according to the Hawaii Department of Land and Natural Resources.

Rohrer swam down to the whale shark, which was in 30 to 40 feet of water, with a 4-inch dive knife, Jonathan Sprague, who was with the family, recounted to CNN.

Rohrer was like a fish, swimming down to the animal and sawing at the line for 30 to 45 seconds at a time -- all while holding his breath, Sprague said.

"He made five free dives on the animal over the course of about 45 minutes," Sprague told CNN. "Once he got it cut, I was able to get the right side of the rope off the shark's fin, and he pulled off the rest. It was awesome."

The braided fishing rope was about 5 inches thick and weighed at least 150 pounds, the couple's daughter told KHNL.

Whale sharks are listed as endangered worldwide, and their population has decreased by 50% since 1975, according to the Hawaii DLNR.

Untrained people should not try to save an entangled animal on their own, said Sprague, a wildlife control officer in Hawaii.

"In-water work with large animals like this is very dangerous. Animals may dive deep or roll in response to a person latching on like this. If you get hung up in the line, things will end badly, and the story won't be so 'feel-good,'" he said. "We knew this going in, took the calculated risk, and it paid off."