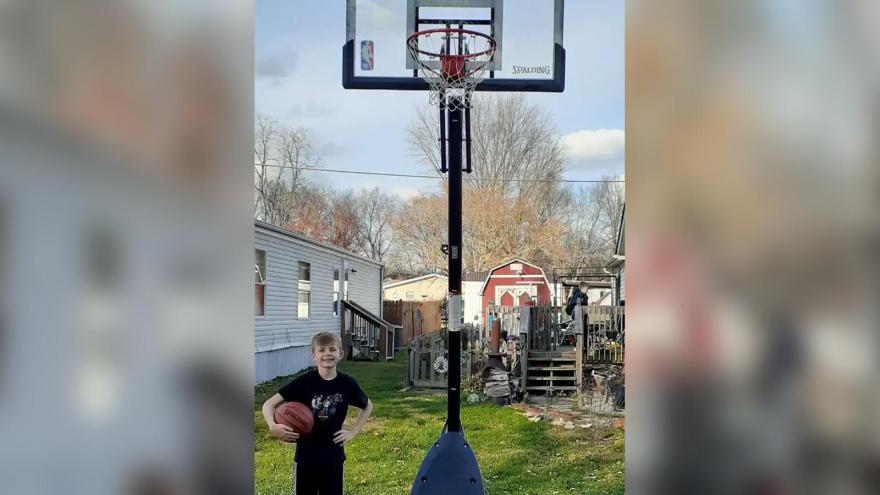 Elijah and his new basketball hoop.

(CNN) -- Every once in a while, as FedEx driver Aubrey Robinson made her regular delivery stops in a neighborhood in rural southeastern Indiana, she'd come across a young boy playing basketball with an old rusty, bent hoop.

After thinking about it for months, Robinson decided to get the boy, 11-year-old Elijah Maines, a new basketball and hoop -- the best her money could buy -- and had the hoop installed while the family wasn't home.

With her surprise gift she left a note: "Just wanted you and your son to have the best hoop that'll grow with him and all his friends," she wrote, signing it as "just one of the FedEx drivers in the area."

It was an instinctive act of kindness that led to a special friendship -- and memories that Elijah's family says will last a lifetime.

"It was crazy to me how happy he was with the bent up, broken hoop. Every time I saw him he was so joyful playing basketball. Seeing him so happy stuck with me," Robinson told CNN. "I just wouldn't stop thinking about it, I really wanted to get him a hoop. I was like, 'Is that weird?' But then I just said, you know what, he deserves it, I'm getting him a hoop."

After installing the hoop and leaving the note, Robinson didn't return to the neighborhood for weeks. She thought the family wouldn't realize it was her, she said, but she was more than satisfied to know in her heart she probably "made the kid's day."

It turns out she did a lot more than that. Elijah's family had gone through a difficult year, with the deaths of four family members, his mom's boyfriend suffering a serious injury, and his mother wrecking her car. Her gift "changed their lives," Coledo Wheeler, Elijah's mom, told CNN.

"I read the note, and the moment I realized who it was from, I just immediately started to cry," Wheeler said.

"When Elijah came home and I showed it to him, he got really emotional. He got teary-eyed but he's an 11-year-old boy so he really didn't want to admit he was crying," she laughed. "He just sat there for 10 minutes staring at the ball until it really touched him that she went out of her way to do something just for him."

It didn't take long for Elijah to run outside and test out his new hoop. For nine years, ever since he was just 2 years old, he had been playing with that same old bent hoop, his mother said. He wouldn't miss a day without playing basketball, even if it meant waking up at 7 a.m. to play before catching the bus to school, she added.

"I can't describe how much I love basketball," Elijah told CNN. "When I saw she got me a new hoop, I was shocked, just totally shocked. My head was racing. It was crazy she randomly did it for me when she could have done it to anyone else."

From strangers to friends

Weeks after surprising the family with the gift, Robinson finally came around again, and the moment she did, Elijah was there waiting.

"I heard knocking and when I opened the door and it was her, I just couldn't help but hug her, and Elijah saw her and ran to her and hugged her too," Wheeler said.

"It's just been a hard year. We're so humbled and grateful she would do this for us. This has been a huge, huge thing for our family. "

After giving her a card he made for her, Elijah invited Robinson to a game of basketball. The two -- along with Elijah's 9-year-old brother -- played basketball for nearly an hour until Robinson had to go back to work.

"It was almost like we'd always known each other. I really bonded with the boys, they were so excited to play with me and were begging me not to leave by the end of it," Robinson said. "I'm just really happy they know that there's someone out there who's there for them, someone who has their back."

Robinson's decision to buy Elijah a new hoop brought back memories of her own days as a kid, when the sport was her safe haven.

"Basketball was an oasis away from my life as a kid. I had a neighbor install a basketball hoop for me across the street because he knew how much I loved it. I would go down there for hours and just be shooting hoops," she said.

"I was bullied for years in school, so basketball was really an oasis. When I heard he had a rough year but he was playing basketball so happily, I wasn't so shocked because I've been there."

Robinson said it's been "an honor" to impact someone's life, and she plans to play basketball with Elijah whenever she's delivering in the area.

"FedEx Ground is proud of the many contributions our team members and vendors make to our communities every day," FedEx spokesperson David Westrick told CNN. "We commend the thoughtful and generous actions of Aubrey Robinson of Reznor Corp., a service provider employee who went above and beyond to help Elijah get a new basketball hoop."