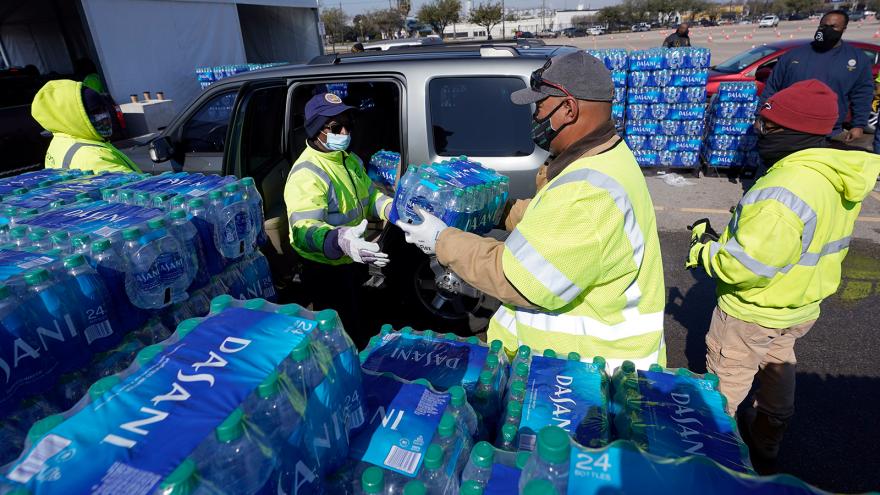 Water is loaded into a vehicle at a City of Houston water distribution site on February 19 in Houston. The drive-thru stadium location provided bottled water to individuals in need while the city remains on a boil water notice. - David J. Phillip/AP

(CNN) -- Texans weathering harsh winter conditions will get some relief from the cold on Saturday, although many in the state are still without basic utilities.

Saturday morning temperatures may be as low as 20 degrees for many inland locations, including Dallas and College Station, but the welcome return of onshore winds and full sunshine will warm the state into the 50's and 60's in the afternoon, said CNN meteorologist Derek Van Dam. Most of the state will stay above freezing after that initial thaw.

A weak cold front is forecast for Sunday evening, but is expected to bring only minimal effects.

The brutal temperatures, ice and snow once caused millions of people in Texas to lose power, but as of early Saturday morning, only about 70,000 people in the state were left in the dark, according to Poweroutage.us, a website that tracks US power outages. However, more than 14.4 million people -- half the state's population -- had reported disruptions in their water service in 192 of the state's 254 counties as of Saturday afternoon, according to Gary Rasp, a spokesman for the Texas Commission on Environmental Quality.

By Saturday, Houston's water system was at "normal operating pressure citywide" but a boil advisory remained in effect, according to Carol Haddock, Houston Public Works director. Mayor Sylvester Turner said the advisory could be lifted by Monday but warned that it "could be a day or two on either end."

Austin's water utility said it was more than halfway to restoring minimum water pressure to serve the city. The system requires a minimum of 100 million gallons in storage and had more than 50 million gallons on Saturday morning, according to the water utility. City officials said service could be back by the end of the weekend.

The Public Utility Commission of Texas said Saturday it was investigating "factors that combined with the devastating winter weather to disrupt the flow of power to millions of Texas homes."

Abbott convened an emergency meeting to look at what state officials said were "unreasonable spikes" in energy bills in the aftermath of the storm.

"It is unacceptable for Texans who suffered through days in the freezing cold without electricity or heat to now be hit with skyrocketing energy costs," the governor said in a statement.

Larry Wallace, mayor of the city of Manor outside of Austin, told CNN Saturday that thousands in his city still had no electricity or water. He said he was frustrated with the poor communication from utility companies and state political leaders.

"I've lost all faith in senior leadership," he said.

In Austin, Smita Pande told CNN she lost power to her home early in the week, and she and her husband stayed at a friend's house until the water went out there, too. The group then traveled to another friend's house that had operating utilities until their water supply failed as well. The three households returned to Pande's home, where they relied on collecting snow to melt in order to flush their toilets.

Although power is now restored, Pande heard that the wait for water may last for a few days.

"At this point we're planning on getting water in a week. We have to assume the worst-case scenario," Pande told CNN's Don Lemon in an interview Friday. "We're hearing two or three days at this point. We're going to hope for the best."

Austin resident Jenn Studebaker said power was back but her family slept around a fireplace they had never used to keep warm most of the week, using chairs and pieces of bookcases as fire wood. And they used melting snow in their bathtub for drinking water and filling up their toilet.

"Everyone is just thinking, If we can just make it one more day," she said.

By Saturday afternoon, fewer than 10,000 power utility customers remained in the dark, compared to high of about 220,000 earlier in the week, according to city officials.

With burst pipes and power outages, Austin Mayor Steve Adler told CNN that his city needs water more than any other resource. When the power grid failed, it affected the main water treatment plant and the city's reservoir was lost, Adler told CNN's Poppy Harlow. Those that do have water are under boil water advisories.

"This is a community of people that are scared and upset and angry," Adler said. "We're eventually going to need some better answers to why we're here and how we prevent it from ever happening again. But for right now we're just trying to get water."

Dr. Schuwan Dorsey told CNN she lost power and water early Monday in Houston and resorted to sleeping with her two dogs in her car, intermittently turning the engine on to generate heat.

Her Life Alert bracelet was offline because her home's electricity was out, Dorsey also said.

"I was in danger with my health," Dorsey said Friday, noting that her power was on for a mere three minutes on Wednesday. Electricity has since returned yet she still has no water.

Many hospitals across the state are strained as well, with no running water, burst pipes, low pressure and boil water notices, according to a statement from Carrie Williams, spokesperson for the Texas Hospital Association.

Williams said that there are also issues with staffing as some employees have had to stay on-site in order to care for patients, putting a strain on food, linens and water. Provisions and medication stocks ran low, although there are some supply trucks moving Friday, Williams said.

"We were not prepared at all," she told CNN Saturday. "The guidance we got before the storm was that, you know, it would be cold, roads would freeze, don't drive. There was no suspicion we would be without electricity, with below-freezing temperatures outside or that people would be without water."

Bicette said patients arriving at the hospital included people burned in fires and entire families with carbon monoxide poisoning. Patients who missed dialysis treatments and others who relied on electric medical equipment are showing up at the emergency room "very, very sick."

"Things are getting to be a little scary and a little dangerous, because, again, we're having such a high influx of sick patients coming in," she said. "There aren't enough staff to take care of these patients right now."

As residents of the city of Killeen, Texas, were under water conservation conditions Friday night, fire crews battled a blaze that tore through a Hilton Garden Inn near Fort Hood, according to a tweet from the Killeen Police Department.

Video from CNN affiliate KWTX showed multiple police and fire crews on the scene where the building appeared to be completely engulfed. CNN has contacted the Killeen Fire Department for additional details and is awaiting comment.

Water disruptions aren't expected to go away once the freezing temperatures do: frozen pipes have burst, but many are concerned even more pipes will as they thaw.

To address the breaks, Abbott announced Friday that he is working with the Texas State Board of Plumbing Examiners. More than 320 plumbers have renewed their plumbing license, Abbott said, and the plumbing board is coordinating with out-of-state companies to bring more personnel to Texas.

"We know that there will be great demand for plumbers today, tomorrow ... this weekend, in the coming days," the governor said. "We want to make sure that we do everything we possibly can to help you gain access to the plumbers that you need to solve your plumbing and leakage problems along those lines."

The state is also boosting the testing of local water systems by partnering with the federal government and neighboring Arkansas, Abbott announced Friday.

Working with the US Environmental Protection Agency, the Texas Commission on Environmental Quality has set up three mobile water testing labs, accord to Abbott.