A Florida man took his grandson magnet fishing. Police are now investigating what they reeled in 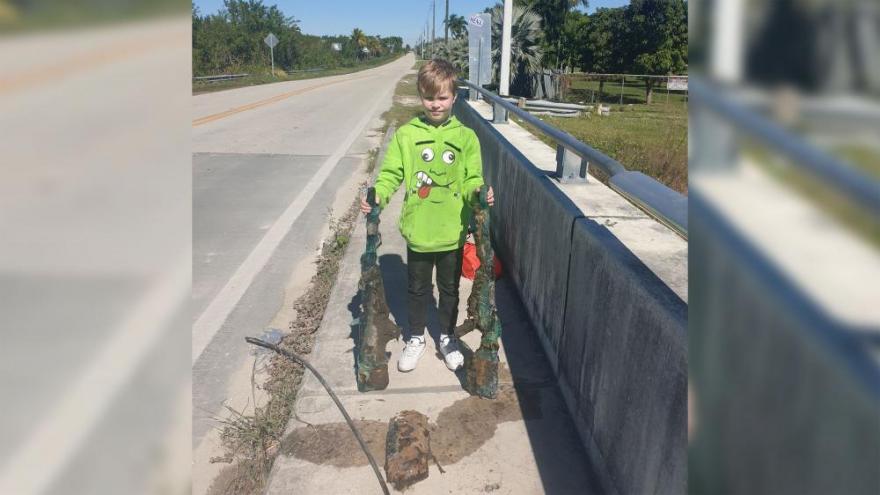 Allen Cadwalader, 11, found what his grandfather believes are two sniper rifles wrapped in shrink wrap during a magnet fishing trip in Homestead, Florida.

(CNN) -- A Florida man and his grandson couldn't believe their eyes when they reeled in more than just some scrap metal and bottle caps during a magnet fishing weekend trip.

Duane Smith and his 11-year-old grandson, Allen Cadwalader, were out on a magnet fishing trip on January 30 in Homestead, a suburb of Miami, Florida, when within five minutes of their arrival, Cadwalader reeled in two sniper rifle receivers and bolt carrier groups wrapped in shrink wrap, Smith told CNN.

This was their first time magnet fishing, Smith said, and he chose a bridge with a canal near where he normally goes hiking.

Magnet fishing uses a strong magnet attached to a thick rope in an attempt to fish out metal objects that have sunk to the bottom of canals, lakes, ponds and rivers.

It's a hobby Smith recently became interested in after watching several YouTube videos about the ins and outs. He figured this would be a more engaging activity for his grandson, who has autism, than traditional fishing.

"With magnet fishing every time I cast out or every other time I'm coming up with something," Smith said. "There's a bottle cap or you know, $7,000 sniper rifle."

Smith calls it beginners luck but said thanks to the YouTube videos he watched, he was prepared to find all sorts of things.

"It's kind of like a gambling addiction where you don't know what the next pull of the slot machine is gonna be," Smith said. "A lot cheaper than playing slots."

Smith, who is retired infantry soldier and trained in deploying sniper weapons, said he knew the weapons were military grade. He estimates each piece weighed 20 pounds and after doing some research, Smith estimates they're worth $20,000 and could have been there for up to a year because of the condition they were in.

The guns were not loaded, according to Smith, and no ammunition was found.

The weapons were covered in debris, so once they got home, Smith and Cadwalader cleaned them off for 30 minutes to an hour to find that the serial numbers had been ground off.

In the meantime, Miami Dade Police said they could not confirm the information on the weapon type, condition or status until they are processed by their forensics lab.