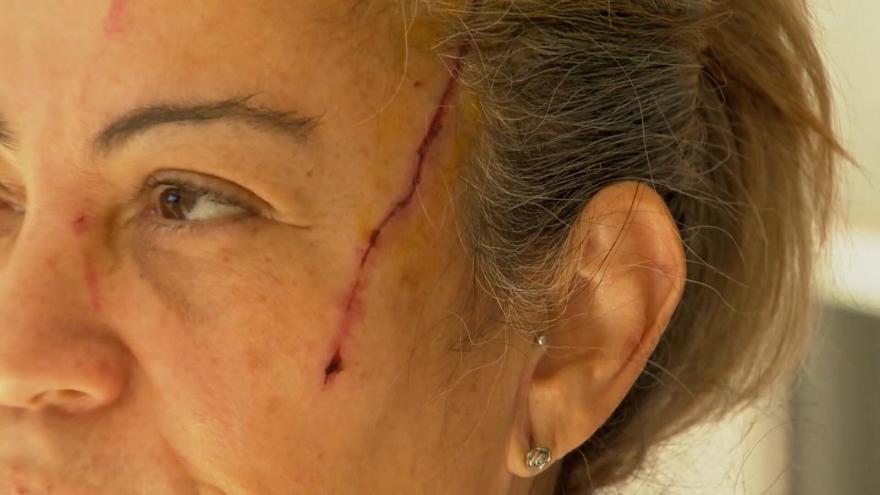 The woman received scratches on her face from the attack.

(CNN) -- A woman walking her dog was attacked and injured by a bear, according to the Florida Fish and Wildlife Conservation Commission (FWC).

The woman, who wasn't named by wildlife officials, was attacked by a black bear on January 13 in DeBary, a city north of Orlando.

The FWC and the Volusia County Sheriff's Office responded to the incident, which happened around 9 pm. Police released bodycam video of that night and it shows the injured woman with scratches on her face.

"He (was) kind of like jumping me when I was running, he jumped me and threw me on the floor," the victim said when describing the incident to officers.

The woman was able to escape the encounter with non-life-threatening injuries, according the the news release. She suffered scratches on her face and lower back, along with a concussion, according to CNN affiliate WESH. The woman identified herself as Aydee.

"I heard her screaming from down the road. It was awful," an eyewitness is also heard saying in the video.

Once at the scene the sheriff's office spotted an adult female bear and her yearlings in a nearby tree. Officials darted the adult bear and had it humanely killed because of the possible public safety threat it posed, according to the FWC.

"The three-100-pound yearlings are enough to survive on their own and so no attempt was made to capture them," the commission added.

Bear attacks in Florida are extremely rare. This is the 14th documented attack against a person causing moderate to serious injuries by Florida black bears since 1976, when the commission started keeping records, according to FWC.

The last bear attack in Florida occurred in March 2020 when a teen was bitten by a bear as he was leaning against a tree in a park in Ocala, according to FWC.