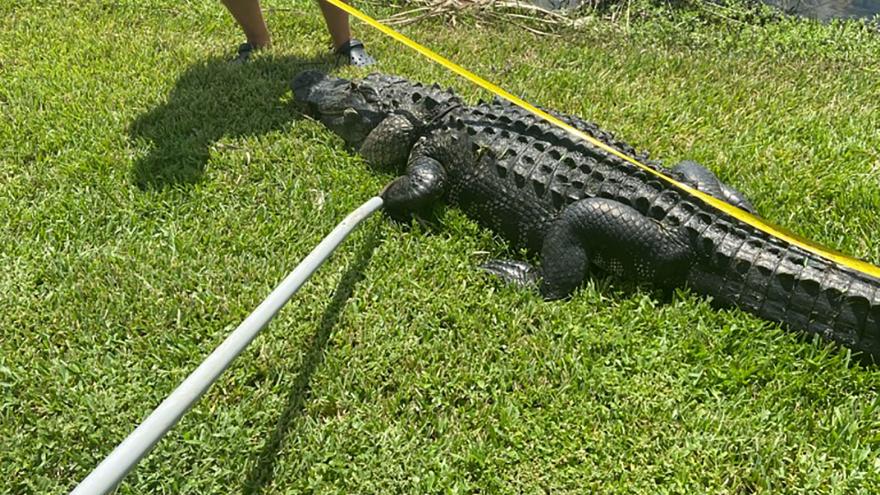 Florida Fish and Wildlife Conservation Commission-The alligator that bit the woman was caught by a licensed trapper and taken to an alligator farm.

(CNN) -- A Florida woman is recovering from injuries she received when she was attacked by a 10-foot, 4-inch alligator while trimming trees in Fort Myers.

The 27-year-old woman was trimming by the edge of a lake near a country club in Fort Myers on September 10 when the alligator bit her.

She was taken to Lee Memorial Hospital and treated for injuries to both legs, according to the Florida Fish and Wildlife Conservation Commission (FWC).

The alligator was later caught by a contracted nuisance alligator trapper and taken to an alligator farm, according to the commission

The FWC said it is are still investigating the incident.

A few days later on September 13, a man suffered injuries to his leg when he was bitten by an alligator while walking his dog along a residential canal in Port St. Lucie, FWC said. The 8-foot, 3-inch alligator that bit him was removed and transferred to an alligator farm.

CNN affiliate WPTV reported that Mark Johnson, 61, said the alligator clamped onto his leg and was trying to drag him under water. When Johnson poked the alligator in the eye, the reptile let go, he said.

Johnson received 62 stitches and his dog was unhurt, WPTV reported.

Alligator bites are serious, but injuries caused by the massive reptiles are rare in Florida, according to the FWC.

"FWC places the highest priority on public safety and administers a Statewide Nuisance Alligator Program (SNAP)," FWC said in a statement to CNN. "The goal of SNAP is to proactively address alligator threats in developed areas, while conserving alligators in areas where they naturally occur."

SNAP uses contracted nuisance alligator trappers across Florida to find and remove alligators who may pose a threat to people or pets.