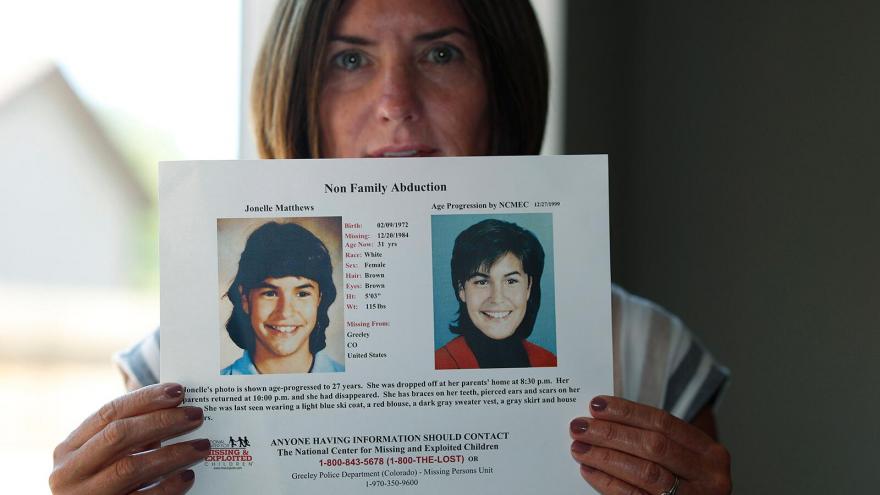 Jennifer Mogensen holds a poster of her adopted sister, Jonelle Matthews after her remains were discovered in 2019.

(CNN) -- More than 35 years after a 12-year-old girl disappeared in Greeley, Colorado, a former Idaho gubernatorial candidate has been indicted in her death.

Pankey was arrested without incident Monday at his home in Meridian, Idaho, according to Rourke.

According to court documents, Pankey was was indicted by a grand jury on October 9 on charges including two counts of first degree murder, second degree kidnapping and crime of violence charges related to Jonelle's kidnapping and death.

He is being held without bond in Ada County Jail pending extradition to Colorado, Rourke said.

Rourke said there is "no definitive" DNA link between Pankey and the girl's remains.

CNN has not been able to determine if Pankey has legal representation.

Pankey 'intentionally inserted himself in the investigation'

According to the indictment, Pankey lived about two miles from Jonelle's home at the time of her disappearance and about 10 miles north of where her body was found decades later.

The court document also said Pankey "watched school children walk home from" the middle school the victim attended and said he owned a gun the year she disappeared.

The indictment also states Pankey was in contact with authorities following Jonelle's disappearance, and "intentionally inserted himself in the investigation many times over the years claiming to have knowledge of the crime which grew inconsistent and incriminating over time."

Pankey also searched for information on Jonelle's death in newspapers as well as on the radio and internet, the indictment said.

In a September 2019 interview with the Idaho Statesman, Pankey, who ran in the Idaho Republican primary for governor the year before, said he was under investigation for the killing and that police searched his Twin Falls home. Pankey added he didn't know Jonelle or her family.

Jonelle's remains were found by a worker at a pipeline site in July 2019. The cause of death was "determined to be a gunshot to the head," and the case was ruled a homicide, the indictment said.

In August 2020, the Weld County District Attorney's office announced a grand jury was investigating her death.

Rourke said the investigation began focusing on Pankey in mid-2018, prompting a review of evidence and new interviews.

Jonelle's sister was in the courtroom when the indictment against Pankey was returned Friday, Rourke told reporters Tuesday. He said the office has also been in contact with Jonelle's family whose reaction was "one of genuine relief and excitement at this development."

"I trust this new development helps the Matthews family, their friends, and our community to receive some closure and healing from this horrific crime," the chief added.

"To the Matthews family, I pray that this news brings you some closure and hope as we continue to pursue justice for Jonelle and your family," Jones said. "We have never forgotten Jonelle and we never will."

Family friend says arrest is 'the beginning of closure'

Russ Baxley, who attended the same church and was friends with the Matthews family, told CNN affiliate KCNC after the announcement that the indictment was "the beginning of closure."

"The Matthews were good friends of ours. We went to the same church; our daughters grew up together," he told to the affiliate, adding that his daughter sang in the choir at the church with Jonelle.

"My daughter was devastated and she still is," Baxley told the station. "It just eats on you, not knowing for so long ... when they found her remains it was a weight lifted off our shoulders."

Baxley said he was out searching for Jonelle the day after she disappeared and was one of about 800 people who came together to search the county.

He told KCNC he heard about the arrest today when his wife was reading her tablet and screamed.

"When they held up the milk carton today ... it brought up the memories," Baxley said, telling the reporter that he used to run the machine for the dairy company that made the carton with Jonelle's picture on it.

Baxley told the affiliate that he hopes the arrest can give the family some peace.

"It's closure, it's the beginning of closure. It's justice," he said to KCNC.