A Fort Jackson trainee is in custody after a school bus full of students was hijacked in South Carolina, sheriff says 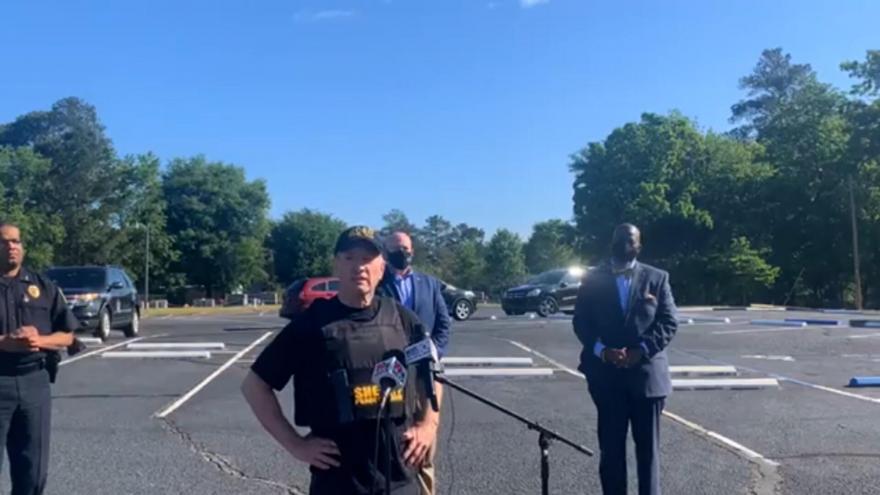 A Fort Jackson trainee is in custody after allegedly hijacking a school bus full of students on its way to Forest Lake Elementary School in Columbia, South Carolina, the Richland County Sheriff Leon Lott said.

(CNN) -- A Fort Jackson trainee is in custody after allegedly hijacking a school bus full of students on its way to Forest Lake Elementary School in Columbia, South Carolina, the Richland County sheriff said.

Sheriff Leon Lott called the incident "a very scary situation," but said none of the 18 children on board the bus were injured. The driver was also uninjured.

"Probably one of the scariest calls we can get in law enforcement, and as a school district, is that a school bus has been hijacked with kids on it with someone with a gun. And that's what we had this morning," Lott told reporters at a news conference Thursday.

Lott said that at around 7 a.m., a trainee dressed in physical training clothes left the Army post with a rifle. According to Lott, the 23-year-old was in his third week of training.

Lott said the sheriff's department received a call reporting an individual on Interstate 77 who was flagging people down and trying to get into cars. Lott said the trainee eventually ended up at a bus stop where children were boarding the bus and he got on as well. Lott said around the same time, a sheriff's deputy was flagged down by a parent who said their child was on a bus with a man who had a gun.

"He got on bus and told the bus driver he didn't want to hurt him, but wanted him to take him to the next town," Lott said.

The Richland County Sheriff's Department announced that the suspect, identified late Thursday as Jovan Collazo, would be charged with 19 counts of kidnapping, armed robbery, carjacking, pointing and presenting, use of a weapon during a violent crime and unlawful carrying a weapon on school property.

In a new video released by the sheriff's department, the man identified as Collazo is shown running up to the bus driver, holding a rifle to him and telling him to "close the door" and "drive."

According to Lott, the suspect brought the kids to the front of the bus, where they started asking questions about whether he was going to hurt them or the driver. Collazo then got frustrated and had the children and driver get off the bus.

The video, which has been edited by the sheriff's department, shows Collazo driving the bus and then opening the door and getting off.

Lott said he drove a few miles and was "having difficulties operating the bus" before abandoning it with the rifle inside. Lott said the suspect then wandered through neighborhoods trying to get "rice and clothes."

Collazo was eventually spotted near I-77, where he was arrested. Lott said the entire incident lasted about an hour.

The top priority now was addressing the needs of the children, who were "scared to death," he said.

School District 2 Superintendent Baron Davis said all of the children were offered counseling services when they arrived at school and the district remains focused on addressing their social and emotional needs.

Fort Jackson's commanding general apologized for the "failure" that led up to the incident. "To our community, this is something that was a failure with regard to me and my role in terms of our accountability procedures and processes," Brig. Gen. Milford Beagle Jr. said during a news conference.

"So for me, this was a key failure in our accountability processes that I will fix going forward, because the outcome potentially could have been much worse."

Beagle said the trainee escaped from the post with his rifle by jumping a fence during personal hygiene time shortly ahead of breakfast. Beagle said the suspect did not have access to ammunition, which is stored and monitored at a different site. He said he believes the suspect brought his weapon along because leaving a weapon unattended is an indication someone is missing.

Beagle said the suspect had a 30-minute head start before other trainees noticed he was missing from formation, and notified their drill sergeant. A search of the facility's 52,000 acres then began.

Beagle described the trainee as "very quiet," and said he was from New Jersey. Beagle said he believes he was trying to get home.

Beagle said military authorities will wait for the civilian side of the incident to be resolved before deciding how to proceed. Charges being considered on the military side, he said, include being absent without leave and theft of a weapon.

Fort Jackson is the Army's main production center for basic combat training, according to its website.