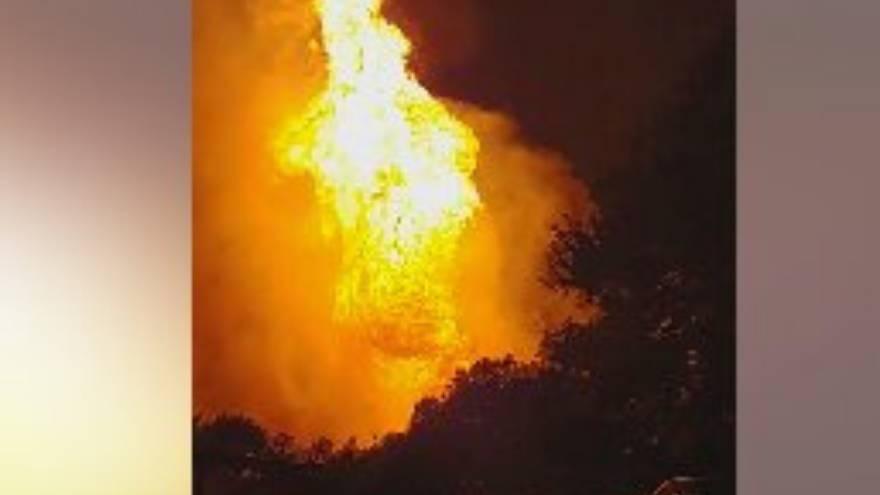 (CNN) -- A gas explosion rocked a Kentucky community Thursday morning, leaving one person dead and lighting at least 5 homes on fire, according to local authorities.

Residents in Moreland were evacuated after the explosion, the Lincoln County Sheriff's Office said. The number of people evacuated was not immediately available. A shelter has been set up at a local church.

Dan Gilliam, the director of Lincoln County Emergency Management, said authorities believe the explosion was the result of a rupture of a 30-inch gas transmission pipeline, but it will take time to definitively determine the cause.

"The part of the area that has been compromised -- there's just nothing left," he told reporters, adding some residents may be able to return to their homes by Thursday afternoon.

"There doesn't really look like there's any in-between back there," Gilliam added. "They're either destroyed, or they're still standing."

Sofia Nunez was at home in Moreland when the explosion happened.

"There was a loud noise and it sounded like a tornado was outside our house. When you stepped outside you could hear the flames and feel the heat. It shook the house for nearly 30 minutes after the flames appeared and neighbors' windows were shattered," Nunez told CNN.

A spokesman for Enbridge Gas, which owns the Texas Eastern Pipeline, said the company was working with first responders to secure the scene.

"Our teams are coordinating with first responders to secure the site. We have isolated the affected line and are working closely with emergency responders to manage the situation," the spokesman said in a statement.

Charlie Lynch woke up in nearby Danville to the whole sky lit up from the explosion. He said he drove 10-15 minutes before taking video, with flames and smoke visible the whole way.

The Lincoln County Sheriff's Office told CNN at least five homes and a garage were on fire after the explosion, but that the gas line fire has been extinguished.

Some residents have gone to area hospitals, the sheriff's office said, but gave no details.