Georgia bar owner removed $3,714 stapled to the walls to give to her unemployed staff 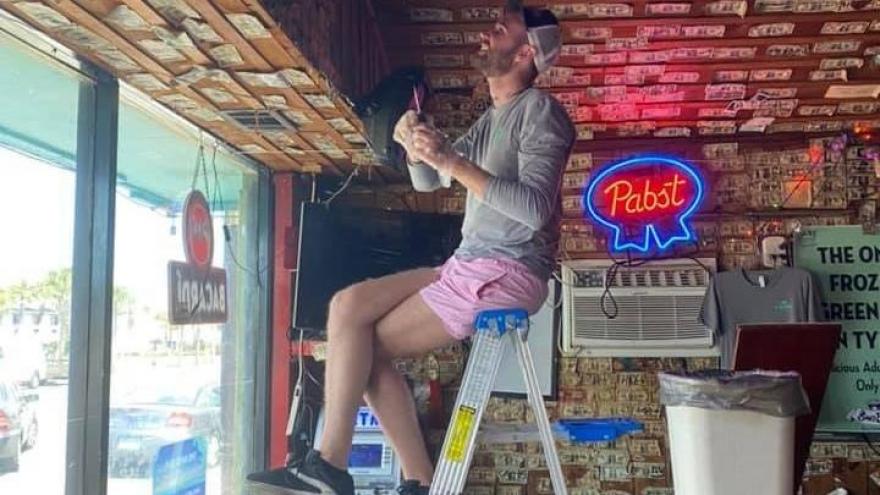 (CNN) -- Before the coronavirus pandemic, Jennifer Knox would walk into her bar and soak in the sounds of people chatting while sipping on their drinks and listening to local musicians strum along on their guitars.

Now, her restaurant, The Sand Bar -- located in Tybee Island, Georgia -- is quiet, with no customers or employees in site.

Like many other restaurants, The Sand Bar had to close its doors after officials put stay-at-home orders in place and mandated restaurants switch to takeout and delivery only. The restrictions, put in place to help control the spread of the virus, also left businesses -- including Knox's -- struggling financially.

As she sat in her empty bar at the end of March and looked around, she realized there was an opportunity to help her now unemployed staff.

"We were sitting there doors locked and I'm like oh my gosh, 'there's money on the walls and we have time on our hands," she told CNN, referring to the bar's decor. "'We gotta get this money down.'"

For nearly 15 years, patrons have been leaving their mark on the island bar by writing on a dollar bill and stapling it on the walls and ceilings. Knox just celebrated her six-year anniversary of owning the bar.

Knox, who worked as a bartender at the bar for seven years before owning it, now runs the bar with her mother, Pam Hessler.

"I can't just sit here and do nothing," Knox said of the decision to take down the dollar bills to try and help her employees. "I'll do what I can for my people."

Over the next three and a half days, five volunteers took on the tedious task to help gently take down the weathered money. Some bills had dozens of staples in them, according to Knox. Some of the currency came from countries across the globe.

After the bills were taken down, it took about a week and a half to clean them off and get them counted. In total, $3,714 were collected and the stacks of bills stretched in piles across the entire bar counter top.

After hearing about Knox's act of giving back, several customers donated to the cause. In total, Knox was able to distribute $4,104 to her staff. Four bartenders and two musicians each were given $600, she said.

Tybee Island, one of Georgia's most popular vacation destinations, depends on beachgoers to keep the town's economy alive. The town has a population of about 3,000 people.

Knox said that March was the beginning of their busy season coming out of winter. Now, like everywhere else, their business is on hold, and Knox remains unsure of what the future holds.

In the spirit of giving, one of the bartenders decided to donate her portion to another Tybee Island bartender. Knox wants to continue to give back to the small island's service staff. She is still collecting donations to distribute.

"We all look out for each other," she said. "We are all in this together."

Knox said she is hopeful that The Sand Bar will reopen when all is over.

When patrons do return to have a cold beverage after relaxing on the beach, they'll notice a fresh coat of bright colored paint replaced the wallpaper of dollar bills.

While Knox is unsure if the stapling of the money on the walls will continue, she said she is thinking of a different plan for customers to leave their mark.