A gravelly voiced President Biden says he has a cold 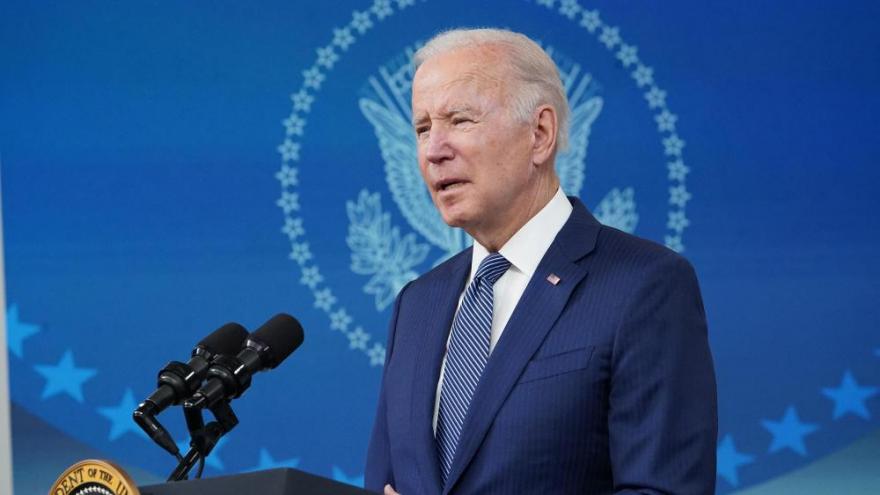 President Joe Biden, seen here in Washington, DC on December 1, told reporters on December 3 he has a cold after sounding gravelly and congested during remarks about the economy.

(CNN) -- President Joe Biden has a cold, he told reporters Friday, after sounding gravelly and congested during remarks about the economy.

"I'm OK," Biden said when questioned about his voice at the end of his speech, which he interrupted a few times to clear his throat.

"I'm tested every day, a Covid test," he added. "What I have is a 1-and-a-half-year-old grandson who had a cold who likes to kiss his pop. Anyway, it's just a cold."

Biden began his scheduled address on November's jobs report sounding husky, his voice audibly lower than its normal pitch. At one point he turned away from his microphone to cough into his hand.

He was not wearing a mask during his speech; he usually does not wear one during remarks from the White House.

A day earlier, when he was returning to the White House from a speech about his winter Covid strategy at the National Institutes of Health in Maryland, a reporter asked Biden how he was feeling.

It's not uncommon for presidents to appear in public sounding hoarser or more fatigued than normal; the job is draining and usually requires interacting with a wide range of people. Presidents become frequent users of hand sanitizer gel to avoid becoming ill.

Yet in the Covid-19 pandemic era, each variation in the commander in chief's condition is closely monitored. In the days before then-President Donald Trump revealed he had Covid last year, he sounded and appeared under the weather.

This week, an excerpt from a book by Trump's then-chief of staff revealed the former President had actually tested positive for Covid several days earlier than initially known. In the excerpt obtained by The Guardian, Mark Meadows wrote Trump subsequently tested negative.

For his part, Biden's disclosure that he is tested every day for Covid goes beyond what the White House has revealed about his testing regimen. Press secretary Jen Psaki said on Wednesday this week that he'd last tested negative on Monday.

In a letter released to the press pool Friday, Biden's physician, Dr. Kevin O'Connor, confirmed that the President has a cold, writing, "As is readily apparent, President Biden is experiencing some increased nasal congestions this week. This can be heard in his voice and he is feeling the colloquially well-known 'frog in ones throat.'"

O'Connor says that the President has been given a comprehensive respiratory panel, "which includes 19 common respiratory pathogens, to include COVID-19, other coronaviruses, influenza, streptococcus, to name a few. ... All of these tests were negative."

O'Connor said Biden has been tested for Covid-19 three times this week.

In February, the White House said Biden would be tested for Covid every two weeks, at the recommendation of his doctor, who cited the efficacy rates of the vaccine. Psaki said on Wednesday that "nothing has changed" in the testing protocols.

She also said Biden's travel schedule and roster of engagements at the White House wouldn't be altered because of the Omicron coronavirus variant, which government health officials are still studying to determine the transmissibility of, and potential resistance to, vaccines.

Biden's supposition that he contracted the cold from his young grandson will be familiar for parents and grandparents of young children. The US Centers for Disease Control and Prevention says the common cold is the main reason Americans miss work, and say adults have an average of two or three colds per year. Kids have even more.

The CDC says most people recover from colds in seven to 10 days, but that those with weakened immune systems, asthma or respiratory conditions are at risk for more serious illness like bronchitis or pneumonia.

The agency recommends rest and taking fluids -- and staying at home to avoid infecting others.

During his physical earlier this month, Biden's doctor made a specific examination into the President's "increasing frequency and severity of 'throat clearing' and coughing during speaking engagements."

He found Biden has a condition known as hiatal hernia, which causes him to have reflux -- something the doctor said could account for his more frequent throat clearing.