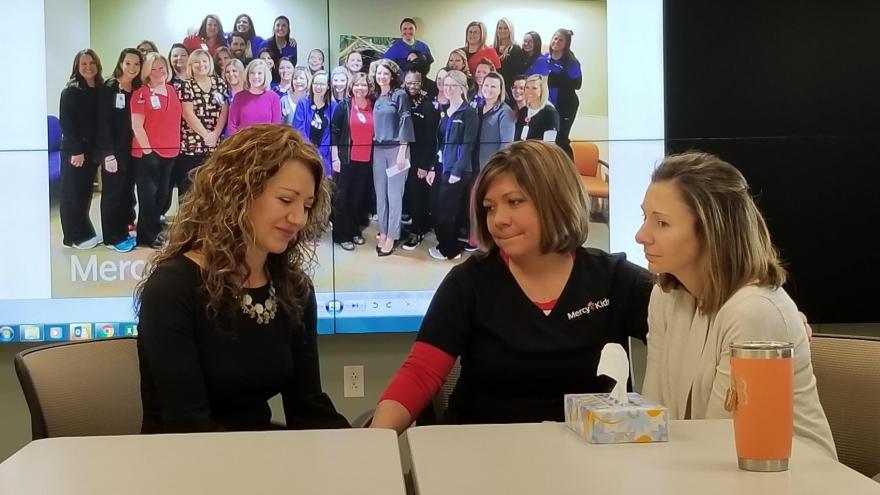 When the group won $10,000, they decided to give the cash to Gretchen Post (left), whose 17-year-old son died by suicide the night of the drawing, and to Casey Orellana (right), whose husband is battling cancer.

(CNN) -- At Mercy Children's Hospital, the nurses and staff of the neonatal intensive care unit pool their money to enter the lottery.

They've been doing it for for years, with varying degrees of success.

Last month, the staffers at the St. Louis-area hospital won big: $10,000 in the Mega Millions lottery.

But instead of divvying up the winnings among their group, they gave the money to two colleagues going through some tough times.

The lottery pool began as a way to bring some levity.

"We have a very stressful job, so it's just something fun that keeps us going," nurse Gretchen Post told CNN.

As last month's jackpot grew to $1.6 billion, nurse -- and lottery pool organizer -- Stephanie Brinkman stayed up late and watched the results come in. Soon, her phone was lighting up with calls and messages from her colleagues. They had a winning ticket.

"I was so in shock, I couldn't believe it," Brinkman said.

They learned that Post's 17-year-old son had killed himself just a few hours before the drawing.

The staff chatted on Facebook and came up with a decision: Give the money to Post for her son's funeral expenses -- and to a neonatologist, Dr. Casey Orellana, whose husband was diagnosed with cancer earlier this year.

Post says she was grateful for the gesture and immediately told the rest of her family.

"It was a little bit of relief that I would have some money to help with Jack's funeral," she says. "It just came at the right time."

Post says Jack was proud of his mother's career and had thought about going to medical school to become a psychiatrist.

"He was very compassionate and intellectual, so I think he would have done so."