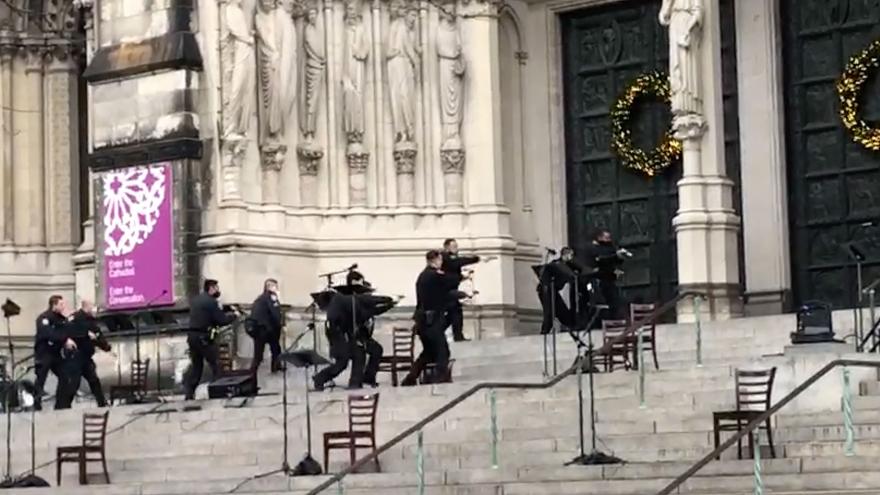 Ted Shaffrey/AP-New York City police officers move in on the scene of a shooting at the Cathedral Church of St. John the Divine, Sunday, Dec. 13.

(CNN) -- Police fatally shot a gunman at the Cathedral of St. John the Divine in New York City following a Christmas concert Sunday afternoon, according to police.

A choir was singing at the top of the steps at the cathedral when the suspect entered the scene with two handguns and opened fire into the air, according to police.

Two NYPD officers and a sergeant were present at the scene and opened fire, striking the gunman in the head, a police source said. Officers who were on site at the time of the shooting were hired to be there for the concert.

"There was some kind of concert at the steps (of the church)," Lt. John Grimpel, an NYPD spokesman, told CNN. "There was an individual firing shots. Officers that were at the scene engaged him."

The shooter -- a man in his 50s -- was pronounced dead at St. Luke's Hospital late Sunday afternoon, a law enforcement source told CNN.

"We don't have a lot of information but our gratitude goes out to first responders. People should keep the area clear as police continue their investigation," Manhattan Borough President Gale Brewer said on Twitter.

Two of Brewer's staff members -- her chief of staff and press secretary -- were present during the shooting but were unharmed, she said.