A gunman killed 5 people and wounded others in a shooting spree across the Denver area, police say 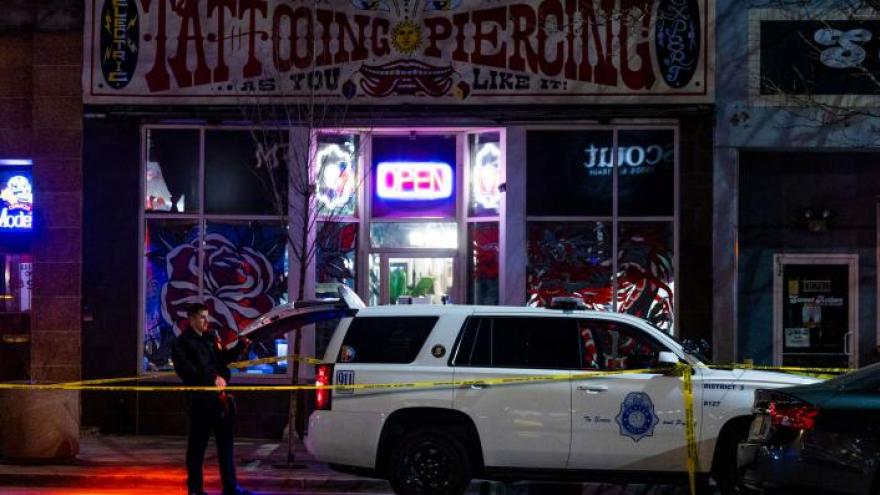 Police investigate after two women were killed and a man was injured December 27 in shootings around Denver.

(CNN) -- A gunman killed five people and wounded several others, including a police officer, in a Denver metro area shooting spree that included a car chase and gunfights with law enforcement, authorities said.

"This individual was on the radar of law enforcement," he said without elaborating.

The gunman allegedly opened fire at multiple locations in and around Denver, including in the suburb of Lakewood, about 8 miles west of downtown Denver, Pazen said.

The rampage is among more than 675 shootings that left four or more people dead or injured in the United States this year, according to Gun Violence Archive.

The shootings began just after 5 p.m. Monday when the gunman killed two women and injured a man in the busy South Broadway neighborhood, Pazen said. The injured man was taken to a hospital and was in critical condition Tuesday but is expected to survive, Denver police Cmdr. Matt Clark said.

Denver police then received a call about a burglary where, Clark said, the suspect broke into a building and shot at people. They escaped uninjured.

A man was then shot and killed in his home several blocks away, near the Cheesman Park area east of downtown, Clark said.

Shots were also fired near the emergency department at Denver Health Medical Center, but no injuries were reported, Pazen said.

Denver police identified a vehicle -- a black Ford -- linked to the incident and gave chase, leading to a gunfight between the suspect and officers, the chief said.

"We believe the individual, after disabling the police car, fled into Lakewood," he said

The gunman made his way to the Hyatt House Hotel in a shopping center a few miles away, where he allegedly shot Sarah Steck, a 28-year-old hotel worker, Romero said. She died later, police said Tuesday.

A Lakewood officer confronted the suspect in the shopping area, and the two exchanged gunfire, police said. The officer was hit once but was able to compose herself and fatally shoot the suspect. She is expected to recover, Romero said.

While McLeod once owned a Denver tattoo parlor -- which, according to the Colorado Secretary of State's office, was incorporated in 2005 and became "delinquent for failure to file Periodic Report" in 2017 -- it is not clear if there is a link between the shootings and McLeod's previous business. CNN has reached out to the Denver Police Department for comment.

The site of McLeod's former business -- just south of the Denver Health Medical Center, where the third shooting took place -- is now occupied by a tattoo parlor with a different name. Another incident was reported at that intersection, Pazen said.

"We believe a gun was fired. However, we do not have any injuries at that particular location," he said Monday.