A hole in the heart of the Rosette Nebula 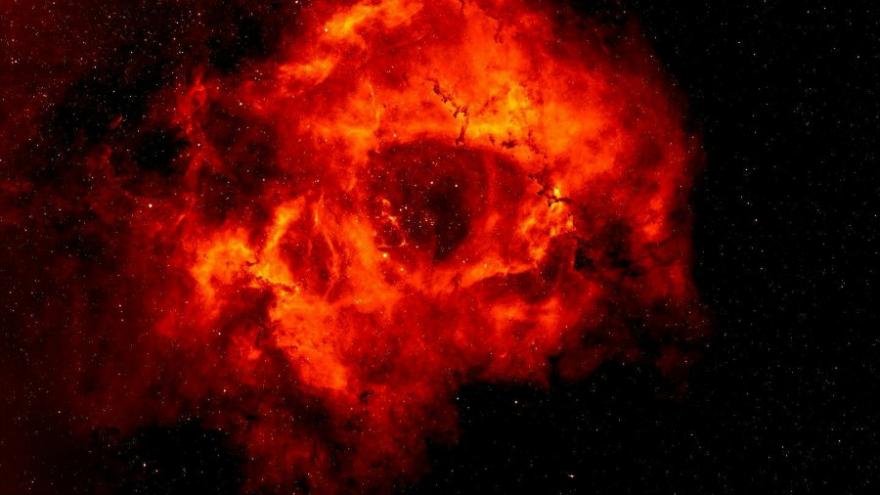 (CNN) -- For years, researchers have wondered why there is a hole in the heart of the Rosette Nebula, 5,000 light-years from Earth in the Monoceros (unicorn) constellation of our Milky Way galaxy.

The distinctive nebula, which some claim looks more like a skull, has a hole in the middle that creates the illusion of its rose-like shape.

The nebula is a giant cloud of dust and ionized gases including hydrogen and helium, and this one contains several massive stars at its center. Though the stars influence the shape of the nebula, they don't explain the hole. The size and age of which simply don't correspond directly with the stars.

If it was influenced by those stars, which are estimated to be 2 million years old, the hole would be larger. Given the length of time the stellar winds of the stars would have been flowing, researchers expected the hole to be up to 10 times bigger than it actually was.

"Only in recent years have observations and theory become accurate enough to question the size of the hole given the ages of the stars and observed properties of the nebula," study author Christopher Wareing of the University of Leeds School of Physics and Astronomy wrote in an email.

"2010 saw the publication of a paper that investigated these properties and convinced us that there was a mystery in the first place. Serendipitously, we have solved the problem on a much shorter timescale!"

In a study released Tuesday in the Monthly Notices of the Royal Astronomical Society, Wareing and his colleagues went through computer simulations to determine the formation of the nebula. They were able to compute nine simulations.

Accounting for stellar wind and radiation from the stars, the simulations modeled the nebula as a thick disc, a thin disc and even a clumpy sphere. The simulations began with all of them originating from a low-density atomic cloud.

"It was the thin disc that reproduced the physical appearance -- cavity size, shape and magnetic field alignment -- of the Nebula, at an age compatible with the central stars and their wind strengths," Wareing said.

The shape of the Rosette Nebula is probably the most famous example of a ring-like nebula, Wareing said.

The nine simulations were performed using the Advanced Research Computing center at the University of Leeds, which required half a million central processing unit hours. For comparison, this would've taken 57 years on your desktop computer.

"These tools enabled the simulations of the Rosette Nebula to be done in a matter of a few weeks," Martin Callaghan, a member of the Advanced Research Computing team, said in a statement.

"We have modeled the entire history of a molecular cloud, from almost-empty space, to forming stars, undergoing feedback effects from those stars and eventually forming into the shape of the Rosette Nebula we see today," Wareing said. "Doing this from start to finish, with reasoned assumptions and theory, having had many of the models fall by the wayside and not recreate the Rosette, is a great example of the scientific process at work."

Wareing hopes the data can be used and applied to other nebulae in the galaxy to determine their shapes.

"So far, we have only explored the formation of an isolated star-forming cloud," Wareing said. "We want to go on and model effects that the rotation of the host galaxy might have on the cloud and that other nearby astronomical events, such as supernovae, might also have."

And the paper published at a serendipitous time -- his daughter's 5th birthday.

"It's rewarding to bring out one of my best pieces of work so far at a time when she's curious about everything in the night sky," Wareing said.