A Houston family whose eviction was filmed receives thousands in donations 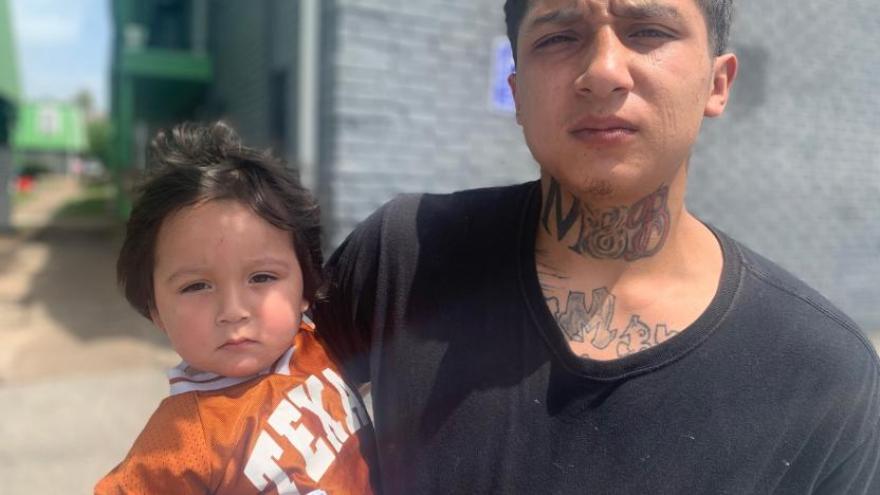 (CNN) -- The law enforcement officers who evicted a young Houston father and his family days later set up a GoFundMe that has raised more than $180,000 to help him and other families facing eviction.

Israel Rodriguez, 24, his wife and two children, ages 4 and 20 months, were evicted from their Houston apartment last week. Rodriguez was behind thousands of dollars in rent after losing his job due to the pandemic, he told CNN as his belongings were tossed next to his door.

Just days later, a GoFundMe account raised tens of thousands of dollars for Rodriguez and his family -- enough for him to land back on his feet, he said. He thanked his supporters in a news conference with the Harris County Constable's Office, which served Rodriguez's eviction notice.

"It's unbelievable how people got such a great heart," Rodriguez said, holding back tears. "People didn't have to help me. But people did it because of their heart."

At least two GoFundMe accounts have been set up to support Rodriguez and his family. An account organized by former Houston teacher Patrick Tarnowski has raised more than $52,000 to help the Rodriguez family. The second account, set up by the Harris County Constable Precinct One Foundation to help Houston-area families who've been evicted during the pandemic, has received more than $181,000 in donations.

The funds will help Rodriguez support his children, who'd been staying in a hotel after the eviction. He and his wife can buy themselves clothes -- he told CNN the two rarely change outfits.

"It's the best thing that could ever happen to me," he said.

Deputy Bennie Gant of the Harris County Constable's Office served eviction notices to Rodriguez and seven other families in one day. The eviction was documented by CNN as part of a story about evictions during the pandemic. The county ordered 200 evictions just last week, more than double what the county sees in a typical week before the pandemic.

Harris County Constable Alan Rosen of Precinct One said the department was "humbled by the outpouring of support and donation offers" since the CNN story was broadcast last week.

"We care," he said, according to the precinct foundation's GoFundMe page. "We are compassionate. We are abiding by the guidelines. It breaks our hearts to evict people. We hope the generosity demonstrated following this single story will begin a movement where we work together as a society that starts a discussion about poverty, prioritizes kindness and encourages philanthropy.""

CNN has reached out to Rosen and the Precinct One Constable's Office for comment and is waiting to hear back.

Up to 40 million Americans at risk of eviction

CNN's Kyung Lah followed Rodriguez as he and his family were evicted last week. He told Lah he'd lost his job when the pandemic hit, and it took him months to find a new one. He'd had a check for $361 in his pocket, but it wouldn't be enough to save their apartment.

An estimated 30 to 40 million Americans are at risk of being evicted in the next few months, according to the Aspen Institute, a public policy studies organization. The pandemic has knocked out millions of jobs and sent the unemployment rate surging upward. The pandemic also struck during a severe affordable housing crisis in the US, according to the institute.

As of the first week of September, the US economy is recovering, with another 1.4 million jobs added and a slight dip in the unemployment rate, but millions of Americans are still on uneven ground in a pandemic with no clear end in sight.

Residential evictions were halted last week until December 31 as a public health measure, according to an order from the US Centers for Disease Control and Prevention and the Department of Health and Human Services. The order protects renters who've lost their jobs or income due to Covid-19 from eviction, though its vague requirements could make it difficult to enforce, legal experts say.

On the precinct foundation's GoFundMe page, Rosen wrote that evictions that meet the CDC's guidelines have been put on hold.