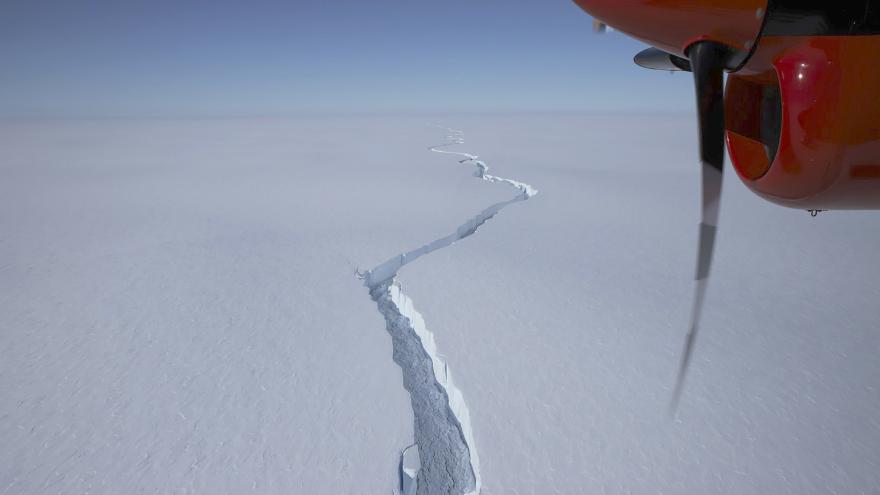 An airplane flies over the North Rift crack in the Brunt Ice Shelf in January. - British Antarctic Survey via AP

(CNN) -- A giant iceberg broke off the Brunt Ice Shelf in Antarctica on Friday, not far from a British scientific outpost.

The 490 square miles (1270 square kilometers) chunk of ice is bigger than New York City and broke free in a process called calving, according to a statement from the British Antarctic Survey (BAS).

The BAS's Halley Research Station, located on the Brunt Ice Shelf, is closed for the Antarctic winter and its 12-person staff left earlier this month.

Scientists have been expecting a large iceberg to break away for years because of vast cracks that have formed in the 150-meter-thick floating ice shelf, according to the BAS.

A new chasm, known as the North Rift, started moving toward another large crack in November and grew a kilometer a day in January.

Aerial video taken in mid-February shows the North Rift stretching as far as the eye can see.

The crack widened to several hundred meters on Friday morning -- freeing it from the rest of the ice shelf, the BAS said.

"Our teams at BAS have been prepared for the calving of an iceberg from Brunt Ice Shelf for years," said BAS Director Jane Francis in the statement.

She said they get daily updates on the ice shelf from an automated network of high-precision GPS instruments as well as satellite images.

"All the data are sent back to Cambridge for analysis, so we know what's happening even in the Antarctic winter, when there are no staff on the station, it's pitch black, and the temperature falls below minus 50 degrees C (or -58F)," she said.

The BAS moved the Halley Research Station farther inland in 2016 as a precaution and staff have only worked there during the Antarctic summer since 2017 because evacuations would be difficult during the dark winter.

"This is a dynamic situation. Four years ago, we moved Halley Research Station inland to ensure that it would not be carried away when an iceberg eventually formed. That was a wise decision," BAS Director of Operations Simon Garrod said in the statement. "Our job now is to keep a close eye on the situation and assess any potential impact of the present calving on the remaining ice shelf."

An even bigger iceberg broke away from the Larsen C Ice Shelf in 2017 and floated into the open ocean late last year.

There have been six Halley Research Stations in place on the Brunt Ice Shelf since 1956 to make atmospheric and space weather observations.

The ice shelf flows toward the sea at a rate of about 2 kilometers per year and icebergs break off at irregular intervals.

"Change in the ice at Halley is a natural process and there is no connection to the calving events seen on Larsen C Ice Shelf, and no evidence that climate change has played a significant role," according to the BAS.

Scientists are now watching the iceberg to see what it will do next.

"Over coming weeks or months, the iceberg may move away; or it could run aground and remain close to Brunt Ice Shelf," Francis said in the statement.