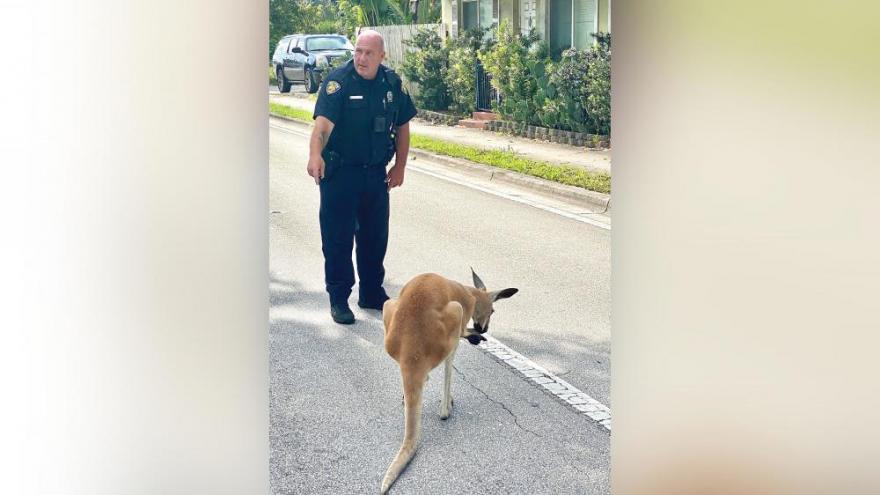 (CNN) -- A South Florida police chase ended with a kangaroo in the back of a patrol car. Of course, it was the kangaroo they were chasing in the first place.

Fort Lauderdale police found a lone kangaroo jumping around the city's downtown area on Thursday morning. Officers fit a leash over its head and lifted the Australian expat into the back of a police cruiser, footage from CNN affiliate WSVN showed.

The kangaroo was taken to the department's stables, police said, and they later tweeted a video of the animal mulling about a wooden stall with grass to eat and a ball to play with.

CNN reached out to the police department to ask about the animal's owner and how it had escaped and is waiting to hear back. In the meantime, the department is sharing live updates about the kangaroo on its Twitter profile.

The hopping marsupial will be kept with police until it can be transferred to a licensed facility, a Florida Fish and Wildlife Conservation Commission (FWC) spokesperson told CNN. The FWC will investigate the incident.

Fort Lauderdale doesn't allow residents to keep exotic animals like kangaroos within city limits. But under Florida's exotic animal ownership laws, kangaroos may be classified as a Class III exotic animal, a species of nonnative wildlife that the FWC requires owners to obtain a permit to keep them.