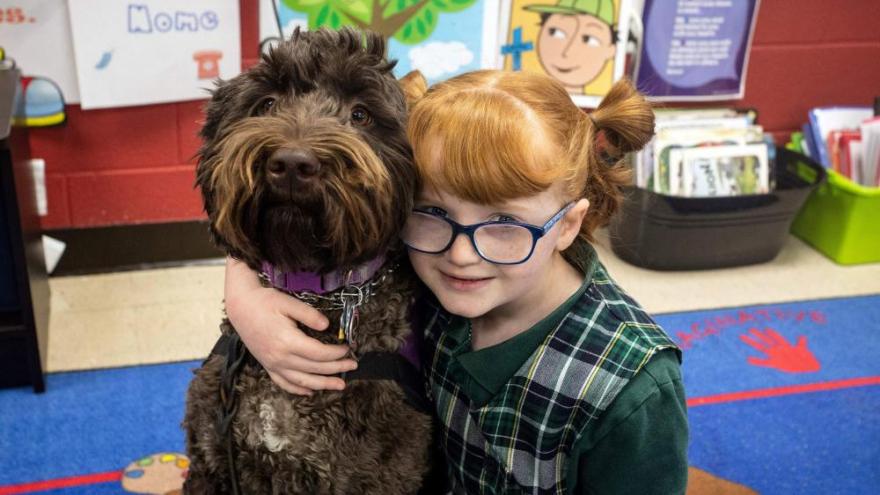 Ariel and Hadley Jo at school.

(CNN) -- An elementary school in Kentucky saved a special spot in its yearbook for one very good girl -- Ariel, a service dog.

St. Patrick Catholic School in Louisville surprised 7-year-old Hadley Jo Lange by including a photo of the Labradoodle among its kindergarten class. Hadley Jo suffers from epilepsy, a neurological disorder that causes seizures.

"This dog has really saved my daughter's life," her mom, Heather Lange, told CNN. "I don't know how I could ever thank Ariel as a mother. She goes with her everywhere, to school, rides the bus with her, goes to her dance classes and soccer practice. She always has her eyes on my little girl. It's a huge sense of security."

At school, Ariel watches over Hadley Jo constantly. The 4-year-old pooch, who bonded with Hadley Jo when she was just a puppy, is able to recognize when the up-and-coming first grader is having an episode.

When these episodes happen at school, Ariel alerts teachers that something is wrong by barking. During seizures, the dog also lies down next to Hadley Jo and moves her body under the child to cushion her fall.

"It's important for us to do all we can to foster our relationship with families and do what we can to support students," Nathan Sturtzel, principal of St. Patrick Catholic School, told CNN.

"We love Ariel. She's part of Hadley Jo's family so she's a part of our family too. Finding a place for her in our yearbook was an easy decision and it was a lot of fun to include her. We loved it."

Ariel is also special for reasons beyond the love and protection she provides Hadley Jo. The Labradoodle is the only service dog in the archdiocese of Louisville, according to Lange.

A victory for children with epilepsy

To many, Ariel's inclusion in the yearbook is just a sweet story about a little girl and her adorable dog. But to Lange -- and other parents of children with epilepsy -- it's a story of victory.

"When I got the yearbook and saw that they included our service dog, that was one of the most touching moments of my life. The inclusiveness meant so much," Lange said.

Hadley Jo had her first seizure when she was only 17 months old. It came on suddenly while the family was dining at a restaurant.

"She was on my lap while I was eating, and out of nowhere my baby fell into my arms and her eyes rolled back into her head and she was jerking," Lange said. "She was having a seizure right before my eyes, it was terrifying. She stopped breathing, and there I was, a mother who thought she was about to lose her child."

Since then, seizures have become a normal part of Hadley Jo's life. But with her puppy by her side, she hasn't let it affect her happy nature and kind spirit.

The Lange family knows how lucky they are to have Ariel. Service dogs can cost anywhere between $20,000 to $60,000. They were able to afford Ariel through community fund raising, but not all families have the same opportunity.

That's why Lange partnered up with the Epilepsy Foundation of Kentuckiana to launch Hope for Hadley Jo, a non-profit organization that provides funding for families whose children need service dogs.

Lange has also become a strong advocate for children with epilepsy, encouraging other schools to be welcoming and accommodating to them.

"It's very comforting knowing my daughter has a home at her school where she is loved and accepted, even though she may not look like everyone else," Lange said.

"St. Patrick made a choice to accept my child and her service dog. The acceptance and inclusion is a true sign of kindness and compassion."