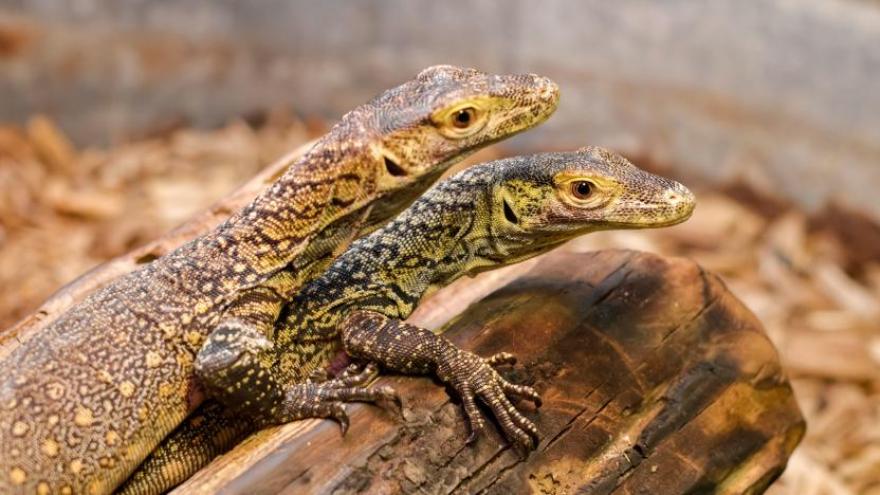 Two of the three baby Komodo dragons that were born at Chattanooga Zoo by parthenogenesis, or without male involvement.

(CNN) -- Charlie, a female Komodo dragon at the Chattanooga Zoo in Tennessee, has proved to be the ultimate independent lady after successfully giving birth to three hatchlings without a male partner.

Even though Charlie and a potential mate named Kadal were placed together in hopes of breeding, the first-time mother produced the three brothers, named Onyx, Jasper and Flint, on her own through a phenomenon called parthenogenesis. It's extremely rare among vertebrates: Only 70 backboned species can do it, which is about 0.1% of all vertebrates, according to Scientific American.

The hatchlings were born last August, but since zoo staff were never able to confirm any successful breeding between Charlie and Kadal, they ordered a DNA test.

Komodo dragons have evolved to reproduce both sexually and parthenogenetically because they mainly live isolated in the wild and become violent when approached, according to the zoo.

Parthenogenesis happens when another egg, rather than sperm, fertilizes an egg, according to Scientific American. The biological process of making an egg cell, called oogenesis, typically produces a polar body, which contains a duplicate copy of egg DNA.

"Normally, this polar body shrivels up and disappears. In the case of the Komodos, though, polar bodies evidently acted as sperm and turned ova into embryos," Scientific American said in 2006 when the first cases of parthenogenesis in Komodo dragons were reported.

Female Komodo dragons carry WZ sex chromosomes, while males carry the ZZ type. When parthenogenesis occurs, the mother can only create WW or ZZ eggs and since WW eggs aren't viable, only ZZ eggs are left to produce all male hatchlings, the zoo said.

"Our staff is thrilled to play a part and to be able to witness this truly miraculous occurrence," Dardenelle Long, Chattanooga Zoo's president and CEO, said in a news release. "As the Komodo dragon is listed as vulnerable to extinction, these hatchlings are even more special and represent a bright future for their species."