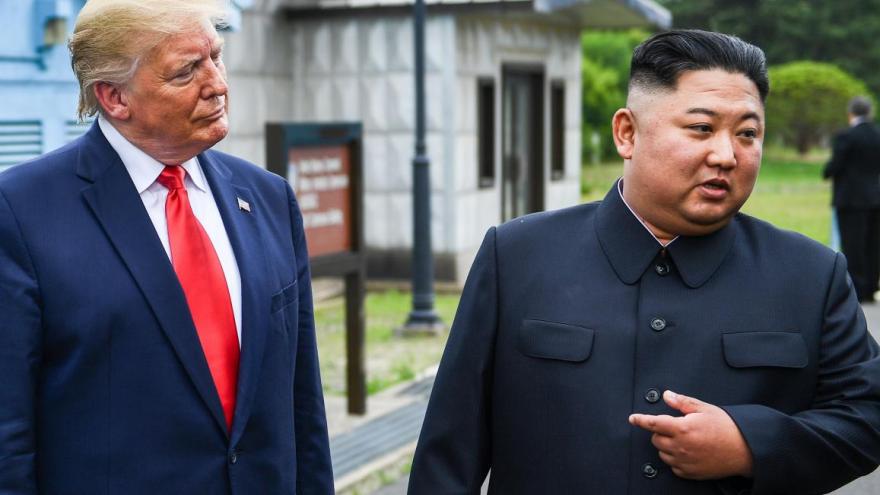 Bob Woodward's new book "Rage" provides a window into one of the strangest diplomatic relationships of the 21st century between President Donald Trump and North Korean dictator Kim Jong Un.

Trump has described them as "love letters," and Woodward writes they show a "diplomatic courtship" that moved Trump from taunting Kim as "Little Rocket Man" and threatening "fire and fury" to becoming the first sitting US president to meet with a North Korean leader. Woodward writes the unusual letters are filled with "declarations of personal fealty that might be uttered by the Knights of the Round Table, or perhaps suitors."

In his letters to Trump, Kim addresses him as "Your Excellency" and punctuates them with flowery prose.

"Even now I cannot forget that moment of history when I firmly held Your Excellency's hand at the beautiful and sacred location as the whole world watched with great interest and hope to relive the honor of that day," Kim wrote to Trump on December 25, 2018, following their first meeting in Singapore.

Another meeting "between myself and Your Excellency," Kim added, would be "reminiscent of a scene from a fantasy film."

Trump's responses are more straightforward but nevertheless filled with flattery.

Trump wrote back to Kim on December 28, "Like you, I have no doubt that a great result will be accomplished between our two countries, and that the only two leaders who can do it are you and me."

Trump has tweeted out two of the 27 letters, but the other 25 have not been seen before. Woodward was able to review all of the letters but was not given copies, so he recorded transcripts of their contents into his audio recorder for "Rage."

Trump's decision to meet with Kim three times -- in Singapore, Vietnam and the Demilitarized Zone dividing North and South Korea -- will certainly be among the most notable foreign policy legacies of his presidency. Their meetings and letters exchanged between them followed a period of significant tensions in 2017 when Pyongyang launched a series of provocative missile tests and Trump responded by taunting Kim on Twitter.

'A moment of glory'

Following the leaders' second meeting, Kim wrote in June 2019 that "every minute we shared 103 days ago in Hanoi was also a moment of glory that remains a precious memory."

"I also believe that the deep and special friendship between us will work as a magical force," Kim added.

In a June 2019 letter to Kim, just before Trump proposed on Twitter that the leaders meet at the DMZ, Trump wrote that "you and I have a unique style and a special friendship."

"Only you and I, working together, can resolve the issues between our two counties and end nearly 70 years of hostility, bringing an era of prosperity to the Korean Peninsula that will exceed all our greatest expectations — and you will be the one to lead," Trump wrote. "It will be historic!"

'I am really, very offended'

Following the DMZ meeting, Trump wrote to Kim on June 30, "Being with you today was truly amazing," attaching a copy of The New York Times front page from that day. Two days later, Trump wrote again, sending 22 photographs of their meeting.

"These images are great memories for me and capture the unique friendship that you and I have developed," Trump wrote.

Kim responded a month later, but this time with a new tone, which Woodward describes as like "a disappointed friend or lover." Kim was upset that US-South Korea military exercises had not fully stopped.

"I am clearly offended and I do not want to hide this feeling from you. I am really, very offended," Kim wrote. "Your Excellency, I am immensely proud and honored that we have a relationship where I can send and receive such candid thoughts with you."

'He was totally prepared to go'

Trump and Kim became pen pals after a period of serious tensions in 2017, when North Korea escalated its provocations with missile tests and Trump responded with tweets taunting him as "Little Rocket Man" and threatening to respond with "with fire and fury like the world has never seen." The situation alarmed Trump's national security team, which feared the US might be close to nuclear war, Woodward reports. Then-Defense Secretary James Mattis believed the ridicule and taunting was "unproductive, childish and dangerous."

"I got over enjoying public humiliation by second grade," Mattis once told Trump, according to Woodward.

In his interviews with Woodward, Trump argues that his decision to meet with Kim has averted war.

In a subsequent interview on December 30, Trump told Woodward: "If I weren't president, we would have -- perhaps it would be over by now, and perhaps it wouldn't -- we would've been in a major war."

Trump argued he "gave up nothing" by meeting with Kim, although North Korea hasn't followed through with the denuclearization steps that the US was seeking. Trump's critics say the meetings provided Kim the legitimacy on the world stage he desperately sought without curtailing Pyongyang's nuclear program.

'Let's go to a movie together'

Woodward's book includes notable color from Trump's meetings with Kim. In the second summit in February 2019, Trump says he knew Kim was not ready to make a deal, and the two leaders argued over which nuclear sites Pyongyang would dismantle.

"I know every one of the sites. I know all of them, better than any of my people I know them. You understand that," Trump says, according to Woodward. But when Kim would not budge, Trump tried another approach.

"Do you ever do anything other than send rockets up to the air?" Trump asked Kim. "Let's go to a movie together. Let's go play a round of golf."

After Woodward obtained Kim's letters, Trump warned him in a January 2020 phone call: "You can't mock Kim. I don't want to get in a f---ing nuclear war because you mocked him."

The CIA never determined who wrote and crafted Kim's letters to Trump, but Woodward writes the agency considered them "masterpieces."

"The analysts marveled at the skill someone brought to finding the exact mixture of flattery while appealing to Trump's sense of grandiosity and being center stage in history."