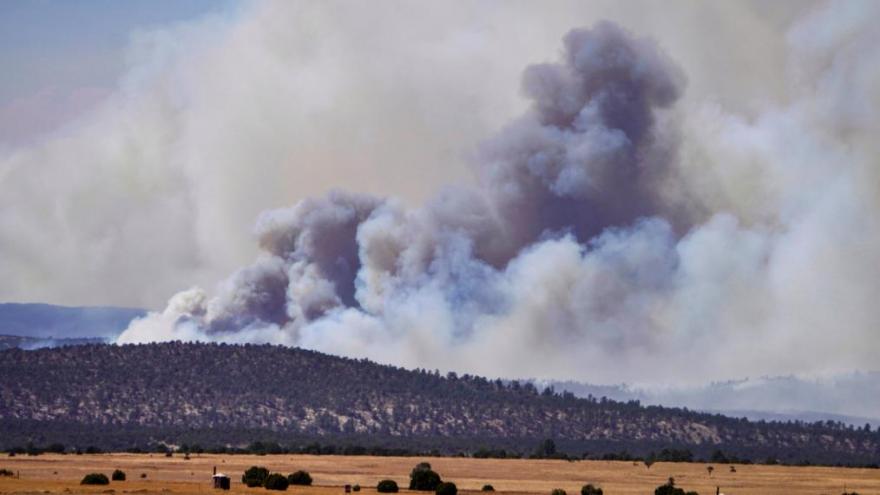 (CNN) -- Wildfires and straight-line winds that have ravaged New Mexico for a month have created a major disaster, President Joe Biden declared, unlocking critical federal aid as the state continues to battle the largest wildfire burning in the United States.

Some 300,000 acres have burned this year in New Mexico -- more than the past two full years combined, CNN meteorologist Brandon Miller said. The Hermits Peak/Calf Canyon Fire -- the biggest US fire this year and the second-largest in New Mexico in at least 30 years -- had torched more than 165,000 acres by Thursday, destroyed dozens of homes and could threaten more than 15,000 more this week, officials have said.

Much of the Southwest has been under a prolonged, severe drought fueled by the climate crisis that has fostered the critical fire conditions. Drought conditions worsened over the past week across much of the Southwest and South, deepening a water crisis and fueling fires across several states, US Drought Monitor wrote Thursday in its weekly summary.

"In California and the Southwest, conditions were dry during the past week with strong winds observed across the region," it said. "The windy, dry conditions exacerbated fire-weather conditions in Arizona and New Mexico where several large early-season wildfires are currently impacting the region."

New Mexico saw the largest increase in the two worst categories of drought -- extreme and exceptional -- adding to the worst designations more than 14,000 square miles, an area about twice the size of New Jersey. April's fire weather conditions were the worst in the state in more than a decade, even ahead of its typically most active wildfire months of May, June and July, Miller said.

New Mexico's governor this week had asked for a presidential disaster declaration as her state fights seven wildfires -- the most in any state, according to the National Interagency Fire Center. This year is already New Mexico's most active for fires since 2018, exceeding the annual average of around 260,000 acres burned, Miller said.

"I have 6,000 people evacuated," Gov. Michelle Lujan Grisham said Tuesday. "I have families who don't know what the next day looks like. I have families who are trying to navigate their children, their own health care resources, figure out their livelihoods, and they're in every single little community."

A presidential disaster declaration would unlock resources "for watershed recovery, restoration of all of those wildlands and personal direct financial reparation and assistance before the fire is out," she said.

Under the order, officials and nonprofits also are eligible for help paying for emergency measures, including evacuation shelters, and hazard mitigation statewide, the declaration states. People in Colfax, Lincoln, Mora, San Miguel and Valencia counties can apply.

It is "a long-term event," officials in the two counties said. "We don't anticipate having 'control' of this fire any time soon."