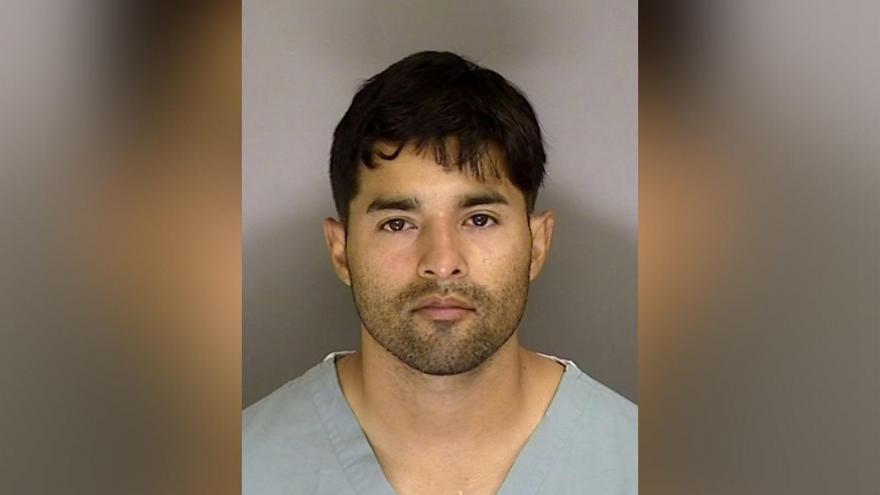 Steven Carrillo is charged with the killing of a protective services officer in Oakland, California.

(CNN) -- A suspect in the shooting deaths of two officers in California had symbols linked to the extremist Boogaloo movement, a loosely knit group of heavily armed, anti-government extremists, US Attorney David Anderson said.

Steven Carrillo, 32, faces a federal murder charge in the May 29 drive-by shooting of David Patrick Underwood, a federal protective services officer, in Oakland, Anderson said. At the same time, a protest against police brutality was taking place nearby.

Carrillo, an active-duty staff sergeant stationed at Travis Air Force Base at the time of the shooting, is also the suspect in the June 6 death of a Santa Cruz sheriff's deputy, Sheriff Jim Hart said last week.

"The Boogaloo term is used by extremists to reference a violent uprising, or impending civil war in the United States," Anderson said.

"Pat Underwood was murdered because he wore a uniform," Anderson said.

An attorney for Carrillo said he wants people to resist "the urge to rush to judgment and wait until the facts come out."

"There is more to Mr. Carrillo than the picture painted by law enforcement," Jeffrey Stotter told CNN.

Carrillo "was a loyal and good airman and has also suffered severe personal loss in the suicide of his wife two years ago," said Stotter, who met with Carrillo on Tuesday. "He's the father of two children who have not only lost their mother, but now they've lost their father."

During a shootout with Santa Cruz sheriff's deputies on June 6, Carrillo used his own blood to write Boogaloo phrases on a vehicle he allegedly carjacked while trying to flee, Anderson said, describing evidence found in the case.

Investigators believe Carrillo used a "ghost gun," a homemade AR-15 type rifle, in both the Oakland and Santa Cruz shootings, according to the complaint. The rifle was recovered in the Santa Cruz investigation.

A second man, Robert Alvin Justus, Jr., is alleged to have driven the van used in the Oakland shooting, according to Anderson. Justus faces charges of aiding and abetting murder and attempted murder, Anderson said.

It's not clear whether Justus has legal representation.

Surveillance video footage "shows Justus walking on foot through downtown Oakland prior to the homicide," FBI Agent Brett Woolard wrote in the complaint, adding Justus "could have walked away from the van and not returned, or he could have reported" Carrillo to law enforcement nearby.

Carrillo was a team leader for the Phoenix Raven, a highly trained security team that guards USAF aircraft in high-terrorist and high-crime areas overseas, according to Department of Defense records.

He had served in Kuwait, Texas and Utah.

Speaking of the allegations that Carrillo is a member of the Boogaloo movement, Stotter said, "What this suggests and highlights is a larger conversation that maybe needs to happen about the impact and influence of groups with extremists ideologies that seem to flourish on social media and on the internet as a whole."

"These groups are not based in Iraq or Syria, they are based in America -- they reach out to radicalize vulnerable individuals, whether they be servicemen or otherwise vulnerable adults."

Stotter declined to comment on the impact these groups may have had on his client.

Carrillo could face the death penalty if convicted.