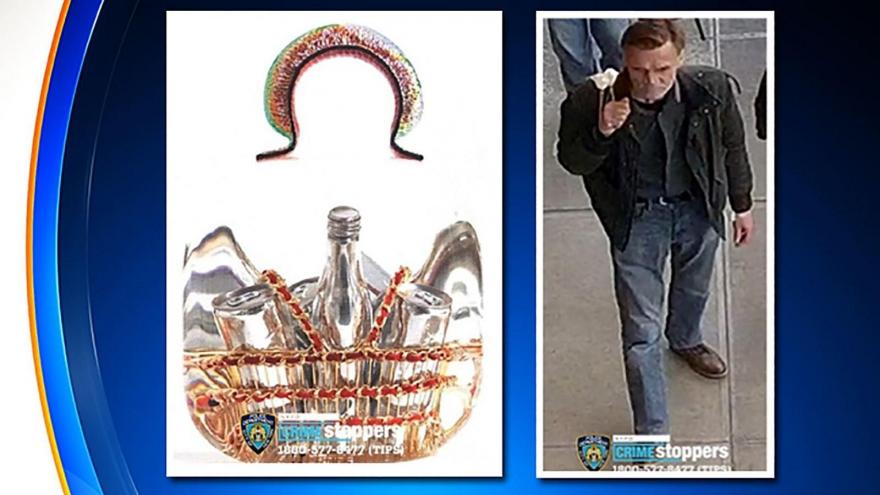 A man walked into an art gallery across from Central Park in New York City and stole a $16,000 sculpture in broad daylight, according to the New York Police Department.

(CNN) -- A man has been arrested and charged after a $16,000 sculpture was taken from an art gallery near Central Park in New York City, according to a news release from police.

Zoltan Genc, 61, allegedly entered Galeries Bartoux near Central Park on Thursday afternoon around 4:30 p.m., according to the New York Police Department. Surveillance footage provided by the NYPD shows a man carrying the sculpture from somewhere out of camera range and walking out the door.

The sculpture, by French artist Fred Allard, is a representation of a traditional shopping basket made of gold chain and filled with silver bottles. The basket is encased in a larger, see-through bag sculpture.

Genc has been charged with theft, according to the news release.

Allard's biography on the Galeries Bartoux website calls his art an "allegoric interpretation of a perpetual search for balance between container and content, between surface and depth, between external and internal appearance." Allard's Instagram account shows many similar sculptures of shopping baskets and bags from high-end stores like Coach, filled with candy or soda, and frozen in their own transparent sculptures.

In a statement, Galeries Bartoux said security is "of the utmost importance to us and our clients" and that during the time of the robbery, the gallery's security representative "was assisting with installation in the back of the gallery."

"The suspect found himself at the right place and time with the wrong intentions," the statement read. "We are taking the situation very seriously and taking further precautions to strengthen the security of the gallery and our employees."