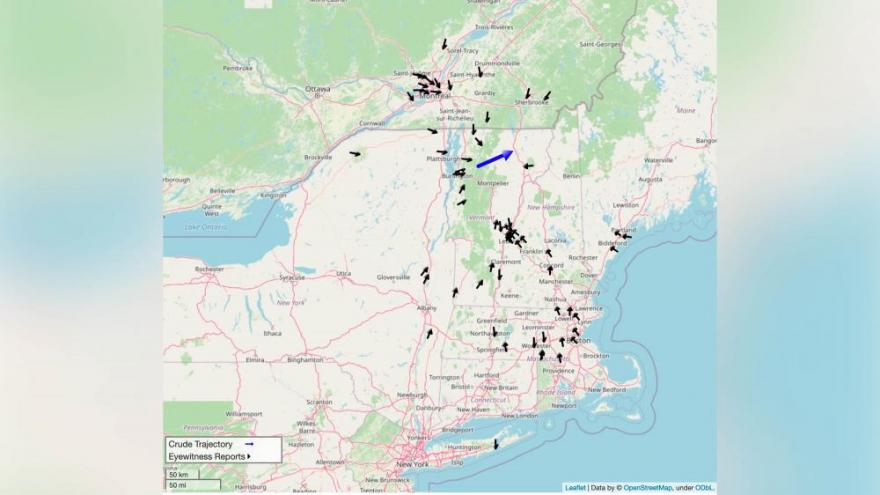 A fireball, traveling at an estimated 42,000 miles per hour, was spotted over the skies of northern Vermont and Canada on March 7.

(CNN) -- A fireball, traveling at an estimated 42,000 miles per hour, was spotted over the skies of northern Vermont and Canada on Sunday night, officials said.

"There was no sound whatsoever," Al Gregoritsch of South Burlington told CNN affiliate WPTZ. "I was very excited to see it. It's a phenomenon I will never forget."

The meteor was seen traveling northeast across 33 miles -- from Mount Mansfield State Forest to Beach Hill in Orleans County south of Newport., the agency said.

NASA Meteor Watch said the object was likely a fragment of an asteroid, while the tremors witnesses reported were caused by a pressure difference between the front and back of the object.

"The space rock fragmented violently, producing a pressure wave that rattled buildings and generated the sound heard by those near the trajectory," the agency said. "Such a pressure wave can also couple into the ground, causing minor 'tremors' that can be picked up by seismic instruments in the area."

Based on infrasound measurements, which are low-frequency sounds that can travel great distances, the agency was able to measure the fireball as weighing about 10 pounds with a diameter of around six inches.

The agency called it, "A nice little firework, courtesy of Mother Nature."