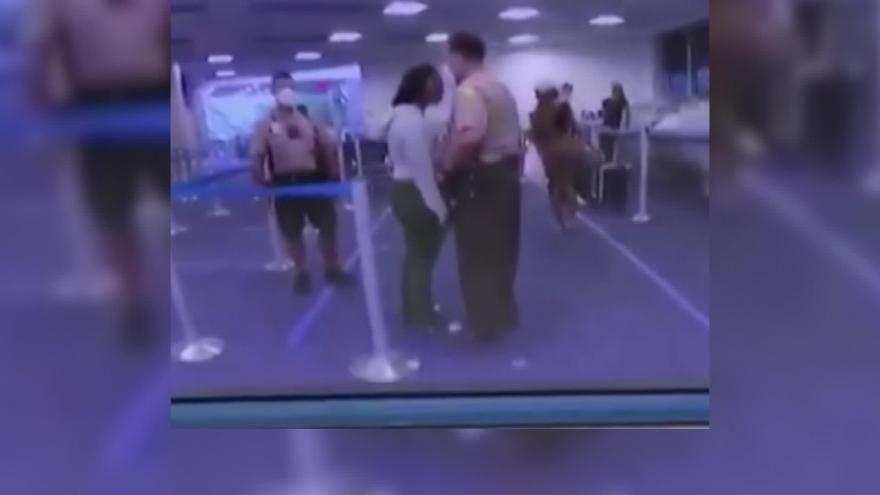 Termination proceedings have been initiated against a Miami-Dade police officer who struck a woman who he said struck him during an argument at Miami International Airport.

(CNN) -- Termination proceedings have been initiated against a Miami-Dade police officer who struck a woman who he said struck him during an argument at Miami International Airport.

The incident happened Tuesday evening, and police body camera video of the encounter circulated on social media. The strike was "way too excessive use of force," county Mayor Carlos Gimenez told CNN.

The officer -- identified by his department as Anthony Rodriguez -- had responded to a call about a woman who was upset with ticket agents after she missed her flight, Gimenez said.

The officer said in an arrest affidavit that he struck Paris Sharon Anderson only after she bumped into him and struck his chin with her head as he tried to persuade her to move on.

Anderson, 21, of Miami, was arrested on initial charges of battery against a police officer, a felony, and disorderly conduct, a misdemeanor.

MDPD said Thursday that Rodriguez would be terminated. "The MDPD holds itself accountable for its actions, and this is just another example of our commitment to do just that," MDPD director Alfredo Ramirez III said.

Gimenez called the officer's strike against Anderson a "punch."

A representative of a police officers' union is calling for a fair investigation.

"After reviewing the video, we believe that there should not be a rush to judgment as all information should be evaluated. It seems some, have condemned the officer prior to the investigation beginning and all we ask is that he be afforded the same due process as all citizens," Steadman Stahl, president of the Miami-Dade Police Benevolent Association, told CNN on Friday.

Stahl previously told the Miami Herald that the officer's strike was "an open-handed slap," and that the woman had pushed her face into the officer's face while he was asking her to leave.

"Clearly she was the aggressor," Stahl told the newspaper.

Video viewed by CNN does not show the entire encounter. The clip starts with Anderson talking with Rodriguez, standing near him and at least one other officer in a terminal building.

The affidavit notes that three officers on scene were wearing body cameras, but only one video has been viewed by CNN.

Anderson eventually steps right up to Rodriguez. Speaking right in front of his face, she says, "What (are) you going to do?"

Rodriguez then swings his right hand into her face, video shows. She stumbles back, and the officer advances and reaches for her. The video is unsteady after that. A man can be heard saying, "she head-butted me" as the woman is placed in custody. It's not clear from the video whether the woman's face made contact with the officer's at any time.

In the affidavit, Rodriguez wrote that Anderson had bumped him with her body and struck him "with her head on the chin."

He also wrote that he "immediately took a step back" before hitting her. While the video shows him shifting one of his feet, it's not clear whether he takes a step.

It's unclear why she mentions race. She is Black. Details about Rodriguez's race weren't immediately released.

Officers had to forcibly grab her hair and keep her face pointing forward to prevent her from spitting on them, the affidavit says.

Anderson complained of shortness of breath after being taken to a police station, but she refused treatment, the affidavit says, before she was taken to the county jail. Details about whether she was injured weren't immediately available.

Anderson posted $5,550 bond, a court clerk said Thursday. A court date is scheduled for July 30. She did not have an attorney listed with the court.

The director of the Miami-Dade Police Department said he ordered that Rodriguez be relieved of duty.

Director Alfredo "Freddy" Ramirez III said he was "shocked and angered" by the video, and said, "This will not stand."

"Actions such as these undermine the hard work that we have invested in our community and causes my heart to break for our community and for the vast majority of our officers who dedicate their lives to serving our county," Ramirez said Wednesday in a statement released on Twitter.

Ramirez said he asked the state attorney's office in the county to help investigate the case.

Gimenez, the mayor, said Thursday what he saw on the video was "uncalled for," and he expects further action to be taken against the officer later in the day.

The state attorney for the county, Katherine Fernandez Rundle, said Thursday her prosecutors were "gathering the body camera evidence and witness/victim testimony."

"Like so many in our community, I am angered when I see abusive or improper conduct by a police officer," Rundle's statement reads.

The incident began after an airline ticket agent called police, the mayor said.

A dispatcher told Rodriguez that Anderson was behind a re-booking counter, threatening employees. Rodriguez, when he arrived, saw her "yelling obscenities" at the workers, Rodriguez wrote in the arrest affidavit.

According to the affidavit, a service center supervisor told Rodriguez that:

• Anderson had arrived late for her flight and was denied boarding, and was directed a re-booking desk to be assigned to a different flight.

• She became upset when she was told the next available flight to her final destination wouldn't be until the next morning.

• Anderson went behind the counter to retrieve her boarding pass, and when she was told she wasn't allowed to be there, she allegedly threatened and cursed employees.

• The supervisor told the woman she now would not travel with the airline, and her fare would be reimbursed.

In the affidavit, Rodriguez writes that he then spoke to Anderson, and told her she'd be able to find a flight with another provider. He asked her to gather her belongings so he and another officer could escort her away from the airport's secured side, the affidavit reads.

Anderson "became belligerent and began to yell obscenities" and, referring to the service supervisor, said, "I should go over there and punch him in his face," the affidavit reads.

"This officer immediately took a step back, struck (her) on the left side of the face with an open hand. (She) stumbled backwards and at that time she was taken to the floor where she was taken into custody," the affidavit states.