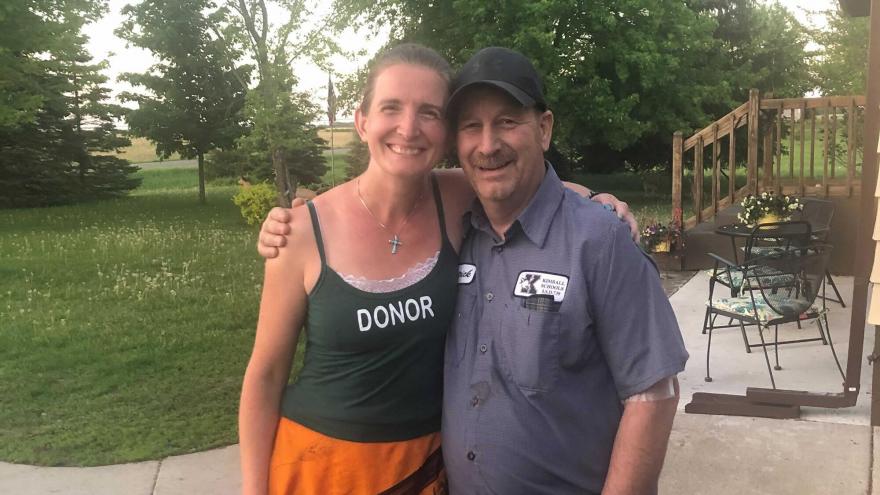 On June 12, Durga found out she was a match with Mertens.

(CNN) -- Third-grade teacher Erin Durga says chills ran through her body the moment she learned a school custodian needed a kidney donation. She had an unshakable feeling that she would be the match to save him.

For the past nine years, their families have been well acquainted. Durga's children called Mertens "Papa" as they grew up in his wife's daycare.

It was known at the school that Mertens was on dialysis, given that the 64-year-old left school for treatment three days a week.

The school community organized a "Hats for Pat" fundraiser on January 31 to help pay for Mertens transportation to dialysis. But no one knew the severity of his health woes until his daughter, Kayla Matten, posted a plea for a kidney donor to social media that night.

"We are now in the process of trying to find someone with an O blood type and someone who is willing to donate their kidney," Matten wrote in a Facebook post.

In 2017, doctors diagnosed Mertens with congestive heart and kidney failure. His kidneys were functioning at 12 percent. And due to his blood type, Mertens could wait as much as five years for a deceased donor transplant, according to M Health Fairview, the hospital that performed the surgery.

"Some family has been tested and unfortunately they are not the same blood type or have other health issues that restrict them from donating," Matten wrote. "We know what prayer can do, and getting the word out there."

Durga says she saw the post and without hesitation decided she would be the one to help.

Mertens' wife, Lynda, shared the same feeling. The next day, Durga contacted Lynda to inform her of her plans to be a donor. "She was sitting next to her daughter and she turned and said it's going to be Erin," Durga said. "We both just knew."

The transplant process was delayed when the coronavirus pandemic hit. However, they were able to move forward with virtual lab visits and appointments, and even through the mail.

On June 12, Durga found out she and Mertens were a match. She organized a celebration at his home and wore a green shirt to represent kidney disease, with "Donor" written across the chest. The two were overwhelmed by emotion.

"Pat's not a lot for words, not a lot for hugging. But we hugged and we were just so excited, both of us, that it was truly going to happen," Durga said. "He was going to get a new kidney."

The transplant surgery took place on July 3. Durga says she was never nervous because she knew this was an event that was supposed to happen.

Today, both patients have recovered. And both returned to work at the school when it reopened in the fall, with social distancing measures in place. Due to the increase in conronavirus cases in the area, the school changed to a distance learning model on November 16.

Mertens says he feels amazing with his new kidney and is thankful to Erin and all his doctors and medical stuff.

"All we can say is that she's an angel," Mertens said of Durga.