A Minnesota National Guard and police team were shot at in a drive-by shooting, official says 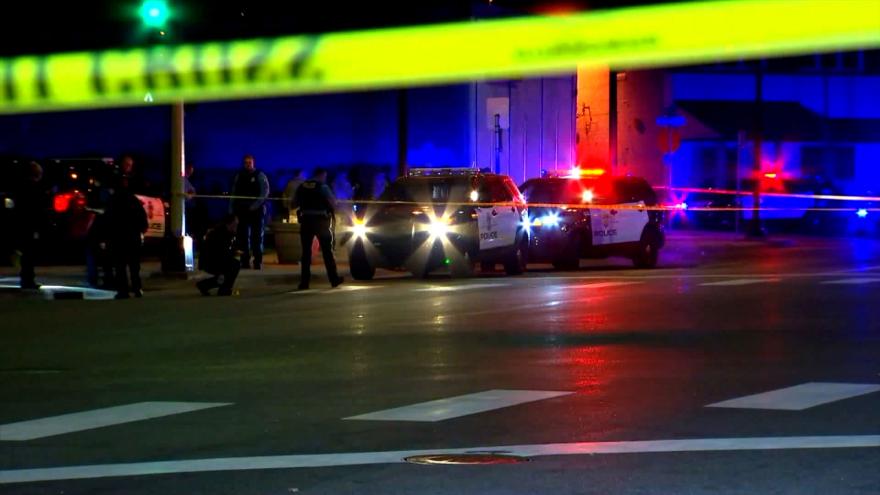 Law enforcement are seen on the scene of a drive by shooting in Minneapolis, where two Minnesota National Guardsmen suffered minor injuries. - WCCO/Pool

(CNN) -- A Minnesota National Guard and Minneapolis police team were fired upon in a drive-by shooting Sunday morning, the state National Guard said in a news release.

The team was providing neighborhood security in Minneapolis when, at about 4:19 a.m. local time (5:19 a.m. ET), a light colored SUV drove by and several shots were fired.

No team members were seriously injured, though two National Guard members suffered minor injuries: One was injured by shattered glass and taken to a local hospital, while the other suffered "only superficial injuries," the statement said.

The city is on edge ahead of the expected conclusion this week in the trial of former police officer Derek Chauvin for the death of George Floyd last May. The area has seen additional protests over the last week after the fatal police shooting of Daunte Wright in Brooklyn Center, a Minneapolis suburb.

The Minnesota National Guard was activated in response to both events, the National Guard's statement said, joining "Operation Safety Net," an effort involving the state, the Minneapolis Police Department and the Hennepin County Sheriff's Office.

"I am relieved to know none of our Guardsmen were seriously injured," Maj. Gen. Shawn Manke, Minnesota National Guard adjutant general, said in the statement. "This event highlights the volatility and tension in our communities right now. I ask for peace as we work through this difficult time."

Gov. Tim Walz told CNN affiliate WCCO he spoke with the two injured guardsmen -- one of whom he said he previously served with in a National Guard unit.

"They are OK," Walz said. "But it highlights how dangerous the situation can get."

Asked about the upcoming verdict in the Chauvin trial, Walz said, "The verdict is going to be a pivotal point in our state's history, and how we respond to that is going to shape us."