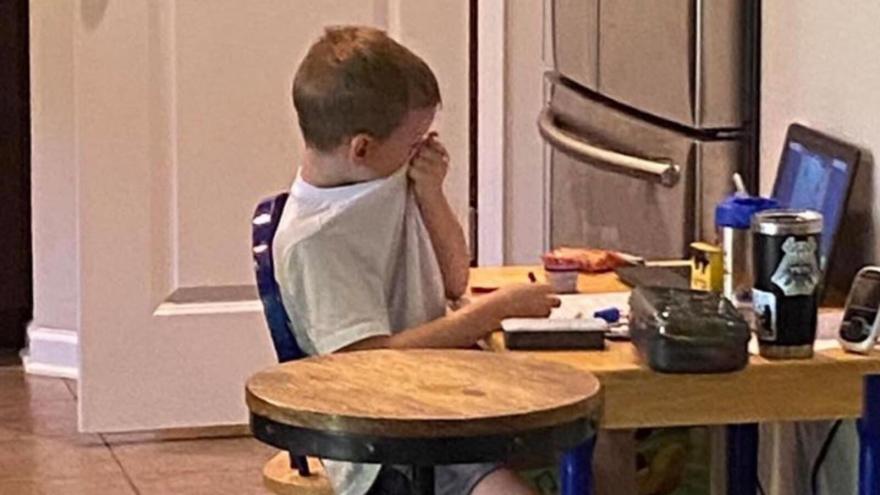 The image of a frustrated kindergartener shows one reality of virtual learning.

Her 5-year-old, a kindergartener at a school in Coweta County, Georgia, was so frustrated with the remote back-to-school experience, that he put his head down and cried.

Seeing him in pain, Coombs knew she needed to do something. So she snapped a photo and shared it online on August 17, in hopes of raising awareness around the difficulty some students face not being in a classroom.

"I just took that picture because I wanted people to see reality," Coombs told CNN affiliate WXIA. "And then he came over and we hugged and I was crying right along with him."

The start of the school year has led to educators and parents nationwide clashing over starting in-person classes amid the pandemic. As of Tuesday, the coronavirus has infected more than 5.7 million people and killed over 178,000 nationwide, according to Johns Hopkins University data.

Most of the nation's school systems decided to start the school year completely online, but some educators welcomed students back to campus full-time. A handful of schools are doing a mixture of both.

Some studies -- including a report published in August by the American Academy of Pediatrics and the Children's Hospital Association -- have shown how easily children can get and spread coronavirus.

But some pediatricians also caution that distance-learning has negative consequences for primary-age students and for working families, many who don't have childcare.

Coombs told CNN she believes children, including her son, are suffering without an option to learn in-person.

"Education is essential for these children, and it's more than one plus one equals two," Coombs told CNN. "Socialization and hands-on experience is how elementary kids learn best.".

The mother of four said she also feels for other families.

"Juggling a household, having an infant in the house, getting 5,000 emails a day from all their teachers, trying to keep up ... different apps, different codes, different platforms, some links don't work," Coombs told WXIA. "You're running from one laptop to another."

Still, she said she is thankful for is the teachers who have gone "above and beyond to make this as painless as possible."

Today 80° Mix of sun and clouds