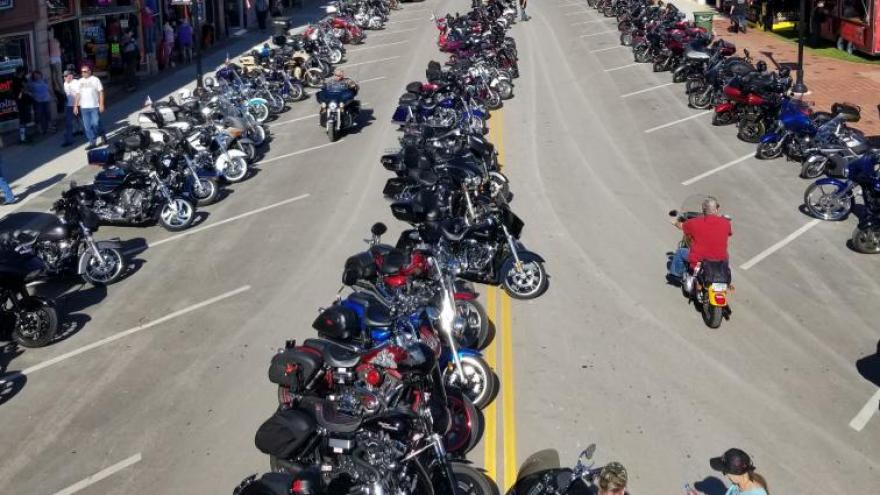 A motorcycle rally that usually attracts 500,000 attendees will take place in Sturgis, South Dakota in a few days.

(CNN) -- Despite objections from a majority of its residents, a South Dakota city is preparing to host what some locals say is the largest gathering of motorcycle enthusiasts in the world.

Visitors have already begun trickling into the city of 7,000 for the 80th Annual City of Sturgis Motorcycle Rally. They are expected to number in the tens of thousands by the time the event -- 10 days of drag racing, music concerts and other festivities -- kicks off on Friday.

The celebration -- which usually draws about 500,000 people -- will take place as the coronavirus pandemic remains out of control in cities across the country and health experts warn against large gatherings that help fuel the spread.

South Dakota has reported more than 9,000 cases of the virus, among the lowest state tally in the country. And Meade County -- home to Sturgis -- has recorded about 78 infections, according to state data.

Some 60% of Sturgis residents, when surveyed, told the city they'd rather the event not proceed as scheduled this year.

But city manager Daniel Ainslie, who expects attendance to be lower this year than in previous ones, said the city council had already heard from thousands who were planning on making the trip and had little choice but to prepare for the crowds.

"As a city, there's nothing we could do, we're not able to put up roadblocks and say, 'You can't come in,'" he said. "And it was quite obvious that we were going to have a lot of people here, even if we didn't call it the rally. The issue is if we did not officially sanction it as a rally, then we would not be able to prepare for it."

'My grandma is absolutely terrified'

The event, which began as a small gathering of enthusiasts in the late 1930s, stretches for miles beyond the city and brings in thousands of tourists and dozens of vendors each year from across the country.

And it helps drive not only the city's economy, but also the region's and state's, Ainslie said.

"There's been a significant look at what the pros and cons are," he said.

"In an area where we have this many national parks and we rely that significantly on tourism, it's very hard to look at a virus that has a very low mortality rate -- and especially from people who don't have co-morbidities -- and state that we should destroy the entire economy, just to try to reduce the spread of a disease which everyone has said is going to ultimately spread to the community anyway," Ainslie said.

But for some people within the community, the threat of the virus looms large. One resident, who told CNN they have asthma, said amid the crowd influx, they feel like they'll be confined to their home to stay safe.

"I fear that I will live in my house for a month after this if not six months after this until it all clears," said the resident, who spoke on the condition of anonymity in fear of retaliation.

"There are people from other states coming here that have had massive breakouts in their cities and in their states and they're coming here and they're traveling here in RVs," the resident said. "You don't think they're going to bring it here to the state and get local residents infected?"

The resident told CNN they have several family members, most of whom are older, that live in the city as well.

"My grandma is absolutely terrified because she has diabetes and is in her 80s and has lupus," they said. "If she gets it, it's a death sentence."

The city said more vulnerable residents in the community can continue using the "Sturgis Good Deeds" program, which for months has recruited volunteers and city employees to deliver groceries for free to those who have underlying conditions or who are concerned about their health.

Proceeding with the motorcycle rally was a difficult decision to make, officials say. The city council heard from residents during meetings in June, prior to making their decision, and also consulted with state and health officials, Ainslie said.

"We also took a lot of data as well, including what our hospital utilization was, what our ICU capacity was, whether or not it was really capable of handling that, what the surge capacity was, and what the state's plans were, how close we were to actually activating that, to ensure that there was ICU bed availability, both during the event, as well as afterwards," he said.

They also heard from several businesses in the region who said they'd be seeking relief from the city if they lost the revenue that usually pours in during the rally, the city manager said. At least one business threatened litigation if the rally was postponed.

Ultimately, the city council decided to proceed with a pared down version of the usual rally.

"Within the city of Sturgis we have canceled a lot of our small events that we usually host during the week, a lot of contests and bike shows ... that usually draw a crowd. All of those have been canceled," city spokeswoman Christina Steele said. Additionally she said, viewing platforms usually put up by the city weren't set up this year as they would be hard to keep sanitized.

The city will provide personal protective equipment to businesses that will be working during the rally, Ainslie said, and recommend sanitizing stations and 50% capacity at bars and restaurants.

But none of that is legally enforceable, he said.

"But we are requiring them to post that recommended capacity limitation so that people are fully aware when they're going in," he said. "If an individual decides to proceed in, then it's by their choice."

In a campground about three miles away from Sturgis that's become central in the rally's festivities, music concerts are scheduled every day of the rally. Performers include the rock band Smash Mouth.

Owner Rod Woodruff says there will be changes there as well.

"Certainly things look different. You have these little stickers on the ground and on the floor, for example, that say, 'hey, don't forget six feet,'" he said. "And 'hand sanitizer here.' We didn't used to have those. So we follow guidelines."

"This event is our raison d'etre," he said. "Our reason for existence is to service the motorcycle enthusiasts, the freedom of American people, period."

Several thousand people camp onsite each year, he says, adding most people have no problem keeping a distance in the two-mile long area. He says the camp is doing what it can to provide for a safe vacation, but attendees are also "exercising their personal responsibility."

"These people on motorcycles, they're risking their life every time they come across an intersection that has a car that can come out there and kill them," he said. "And so they're not all that concerned about a virus when they know what is needed to do in order to stay safe and minimize the risks of infection."