A new federal rule will make it easier to hunt bears, wolves on national preserves in Alaska 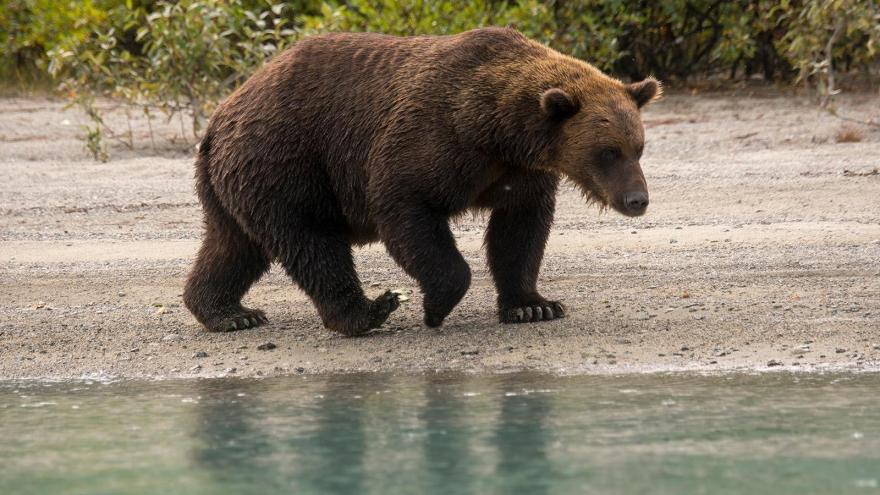 A Brown bear (Ursus arctos) is walking and looking for salmon on a beach along the shore of Lake Crescent in Lake Clark National Park and Preserve, Alaska, USA. The Trump administration published a new rule this week overturning an Obama-era ban on controversial hunting and trapping techniques on national preserves in Alaska.

(CNN) -- The Trump administration published a new rule this week overturning an Obama-era ban on controversial hunting and trapping techniques on national preserves in Alaska.

The National Park Service said the move will bring federal regulations in line with Alaska state law, but critics say the practices are cruel and unsportsmanlike.

When the rule goes into effect next month, hunters will be able to use artificial light to hunt black bears, including cubs, in their dens, use bait to attract brown and black bears and bring in dogs to hunt black bears. They will also be able to hunt swimming caribou and shoot them from motorboats and take wolves and coyotes during their denning season.

These practices are legal in Alaska under some circumstances, but were banned on federal land under the 2015 rule because they would likely throw off the balance of predators and game animals in the environment, according to the Obama administration.

The Department of Interior first proposed the rule change in 2018 to increase access to hunting on federal land and align federal and state rules. Officials expect only a low level of additional animals will be taken because of the changes.

The National Park Service said the new rule is supported by hunting and outdoors groups, as well as tribal leaders.

The rule change has been criticized by conservation groups.

"Through this administration's rule, such treasured lands will now allow sport hunters to lure bears with greased donut bait piles to kill them, or crawl into hibernating bear dens to shoot bears and cubs," Theresa Pierno, president and CEO of the National Parks Conservation Association, said in a statement last month.

"Shooting hibernating mama and baby bears is not the conservation legacy that our national parks are meant to preserve and no way to treat or manage park wildlife," Pierno said.

Laura Smythe, a staff attorney for the Humane Society of the United States, told CNN that the new rule will open millions of acres of land to hunting techniques that most rank-and-file hunters don't support.

"We believe that these rules are cruel and irresponsible," she said. "These practices are used as predator control methods, which means they're used to suppress predatory species to artificially elevate the population of game species."

The rule only applies to the 10 national preserves in Alaska, which are open to hunting fishing and trapping under federal and state law. National parks in Alaska are closed to hunting except for subsistence uses by rural Alaska residents, according to the National Park Service.

Gov. Michael J. Dunleavy praised the decision to lift the restrictions, when the new rule was announced last month and said the prohibitions infringed on the state's right to control its fish and wildlife.

"Hunting and responsible management of wildlife are an integral part of the Alaskan lifestyle and this will further align hunting regulations on the federal level with those established by the State of Alaska for the benefit of Alaskans," he said in the National Park Service statement.