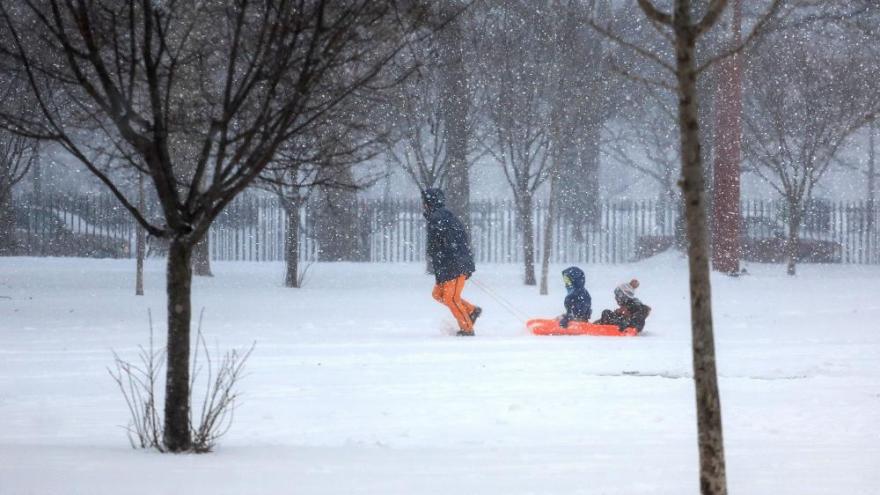 Over the years, snow days have fallen out of favor as school districts push to have them switched to work-at-home days.

(CNN) -- A New Jersey school district wants to keep at least one winter tradition from the pre-Covid days intact: the snow day.

Mahwah Township Public Schools, a school district with approximately 3,000 students in Bergen County, bucked the pandemic trend this week when it said that its schools wouldn't be doing away with snow days.

"We have decided that few childhood acts remain unchanged due to COVID-19 and we will maintain the hope of children by calling actual snow days due to inclement weather," the district announced in a statement. "Snow days are chances for on-site learners and virtual learners to just be kids by playing in the snow, baking cookies, reading books and watching a good movie," it said.

The assurance came as several school districts across the country -- districts that are back to some form of in-person learning -- said there would be no snow days this year, as online learning had shown students could remain home but still attend class over Zoom.

A number of school districts in Kansas said they would plan to have remote learning days instead of traditional snow days this year. A Colorado Springs school district is having its middle and high schoolers "e-learn" on snow days. And New York City's Department of Education, which manages the country's largest public school system, told parents not to expect snow days this year due to the delayed start.

"As we reopen schools for this critical school year, we are utilizing all of the lessons learned from remote schooling this spring to maximize our students' instructional time," New York City's Department of Education said in a statement reported by CNN affiliate WABC. "This includes providing remote instruction during both Election Day and snow days."

Why the fuss over snow days?

The War on Snow Days didn't begin during the pandemic, but it's definitely exacerbated the conflict.

Typically, snow days are "built in" to school's schedule each year, as most schools have a mandated amount of days that they need to be open each year. Even with federal holidays and breaks, most schools are able to satisfy that quota -- meaning that when the weather gets rough, particularly in the Northeast, schools have the legroom to shut down for a few days.

But that doesn't mean the school year always goes perfectly.

It's not uncommon for periods with severe weather to force districts to ration out the "free days" it can give out, or face budget cuts if the year is shorter than mandated. In Ohio, students will go home with "blizzard bags" of schools assignments they're expected to finish. And last year, Pennsylvania passed a bill turning snow days into work-from-home days.

While snow days haven't completely gone away, some school districts said they would be committed to using them as a short-term solution to the coronavirus.

"It's critical for education," a Valley Center Public Schools Superintendent in Kansas told KWCH-12. "As we know, we all lost quite a bit last spring, when we all went remote and did that home learning, and it looks different than it does this year. We refined, we made it better and so we need every moment we can with students to make sure that can achieve as much as we hope this school year."