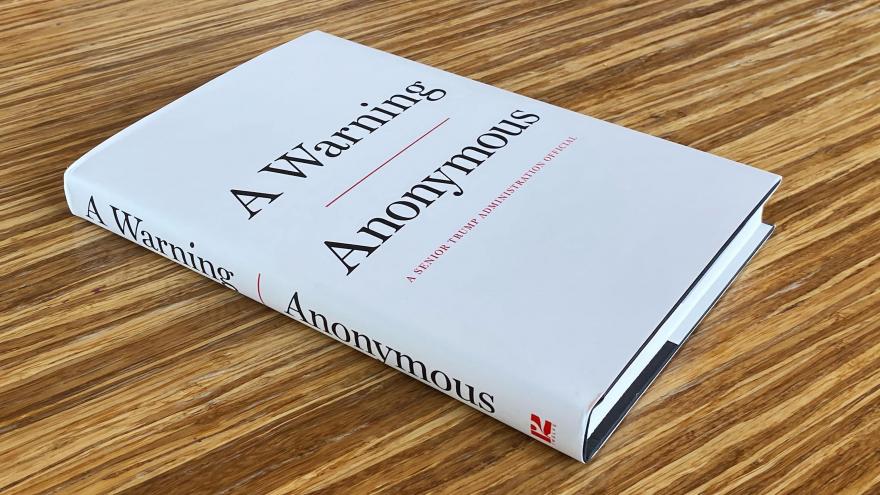 (CNN) -- On Nov. 19, one of the most anticipated political books of the year hits store shelves with the publication of "A Warning" by Anonymous.

CNN obtained an advance copy and gave it a read. Overall the book is sparse on the revelations it provides, especially given the buildup. Part of that is due to the anonymity of the author, who claims to be a senior official in the Trump administration, and his or her desire to remain unidentified. As a result, scenes are often presented as vague recollections populated by unnamed senior officials.

Still, there are a handful of eye-opening claims, among them that members of Trump's team considered sabotaging him to prompt his resignation, that some in the President's inner circle worried he was in the pocket of Russian President Vladimir Putin, and that many administration officials kept letters of resignation in their desks or on their laptops.

Sources familiar with the book have previously confirmed to CNN that the publisher and the author's literary agents were provided verification that the author of the book and is the same person who wrote last year's New York Times op-ed.

The White House has flatly rejected the claims in the book, and in a statement to CNN last week, White House press secretary Stephanie Grisham said "the book as written presents a portrait that is the exact opposite of what the President actually is."

Here are a few of the notable details presented by the book:

The author alleges that senior officials around Trump considered sabotaging him to prompt his resignation, including suggesting that aides should encourage Trump to fire special counsel Robert Mueller.

In one passage, the author describes the sentiments of one adviser:

"As one said, the President's inclinations are so bad that perhaps we should 'give him enough rope' to entangle his own presidency," the author writes. "The advisor suggested letting him fire the special counsel and Justice Department leadership. He seemed eager enough to do it. If aides helped him follow his instincts, they speculated, it would lead to his downfall."

The anonymous official calls this "disturbing on its face" and says government officials should not encourage bad behavior in order to punish Trump for it.

Some in Trump's inner circle worried he was in Putin's pocket

The anonymous official is particularly alarmed by Trump's attacks on the intelligence community. In one pre-election debate prep session, the author claims that an adviser to Trump recommended the candidate acknowledge that Russians had tried to meddle in 2016 and to denounce Moscow for it.

"Yeah, I don't buy it," the author quotes Trump saying.

The author continues: "The bizarre reaction stoked fears, including within Trump's circle, that he was somehow in Putin's pocket."

Once in the White House, the author claims, Trump continued to believe Putin over the US intelligence community in its assessment of Russia and the rest of the world. The author claims that according to a former top FBI official, Trump dismissed information he received from his intelligence agencies about another country's missile capability because Putin had told him something contradictory.

"I don't care. I believe Putin," Trump said, according to the FBI official.

The author argues that the President had a "weakness" for other strongmen besides Putin. One of those appears to be Saudi crown prince Mohammed bin Salman.

Trump seemed to accept the Saudis' explanation that their leader had no involvement with the murder of journalist Jamal Khashoggi in October 2018. The President called it the "worst cover-up of all time," but explained to advisers the simple reason for why he wanted to stick by bin Salman: oil.

Trump wanted to "get rid" of federal judges

The President is depicted as frequently frustrated by the institutions of government that fail to bend to his will. Among his targets were the judicial system, which frequently blocked his executive orders.

"Can we just get rid of the judges? Let's get rid of the [f***ing] judges," Trump once said, according to the author. "There shouldn't be any at all, really."

Trump apparently went on to ask his legal team to write up a draft bill to send to Congress that would reduce the number of federal judges.

"Staff ignored the outburst and the wacky request," the anonymous official writes.

Trump is highly suspicious of disloyalty among staff

The atmosphere the author describes in the White House is "paranoid and secretive," particularly about the career public servants who help advise the President and his political appointees.

According to the author, some meetings in the White House are held for "political only" to exclude those who were not appointed to their roles by Trump. Some of these meetings, the author claims, are held in the White House's secure Situation Room, even if there's no classified information being handled.

The author describes the President as being "wary when he sees faces he doesn't recognize."

"If ever experts from within the administration's bureaucracy are brought into sensitive White House discussions, they must be the 'trusted' ones," the author writes.

Multiple times, the author explains why staying in the administration is a better choice than leaving in protest. "We thought we could keep it together," the author writes.

But several members are apparently ready to leave at a moment's notice.

"We all have draft resignation letters in our desks or on our laptops," the author writes.

There are also "more than a handful of people" who claim to have set "redlines" for themselves -- that is, "boundaries they would refuse to cross or behavior they wouldn't tolerate from the commander in chief."

The author says that while officials have claimed they would quit if Trump pushed them past their redlines, some have nevertheless rationalized their staying on beyond these moral breaches.