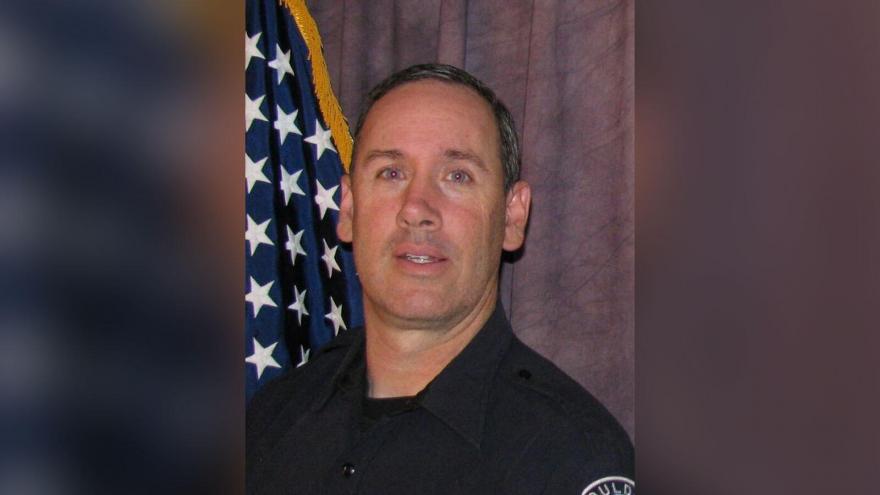 (CNN) -- Eric Talley, the first police officer to arrive at the scene of the Boulder supermarket shooting last week, was the last of the gunman's 10 victims.

To honor his bravery, the non-profit Tunnel to Towers Foundation, set up to support the families of fallen first responders and service members, announced Saturday it will pay off the mortgage on Talley's home.

Talley, 51, is survived by his wife and seven children.

The community came together to grieve him

Hundreds flooded the streets in the days after Talley's death, watching as a hearse transferred his body to an Aurora funeral home.

His patrol vehicle, parked in front of the police station, was adorned with flowers, cards and other tokens of grief and gratitude.

Talley was the first Boulder officer to be killed in the line of duty since 1994, and the sixth on-duty death in the department's history, according to the National Law Enforcement Officers Memorial Fund.

His bravery was known to his friends and colleagues well before his death.

"Didn't surprise me he was the first one there," his father, Homer Talley, told CNN affiliate KUSA.

Talley had been a member of the Boulder police force since 2010.

He was aware of the danger he faced as a police officer. His father told KUSA he recently looked into becoming a drone operator because he thought it would be safer.

Police Chief Maris Herold said at a news conference that Talley was "willing to die to protect others" and embodied "everything policing deserves and needs."

Within 30 seconds of arriving at the King Soopers store, Talley led a team of officers inside to engage the shooter, the Boulder Police Department wrote in a tweet. After Talley, no one else was shot.

A non-profit for first responders is responding to Talley's death

The Tunnel to Towers Foundation was created in honor of New York firefighter Stephen Siller, who died responding to the 9/11 terrorist attacks.

The organization builds mortgage-free smart homes for catastrophically injured veterans and first responders, and pays off the mortgages of first responders and military servicemembers who are killed in the line of duty and leave behind young children.

"It's so important because Eric gave his life and left behind a wife and seven children, and for him to rush in and go toward ... the danger to save people is just incredible," foundation CEO Frank Siller, Stephen Siller's brother, told "Fox & Friends" on Saturday.