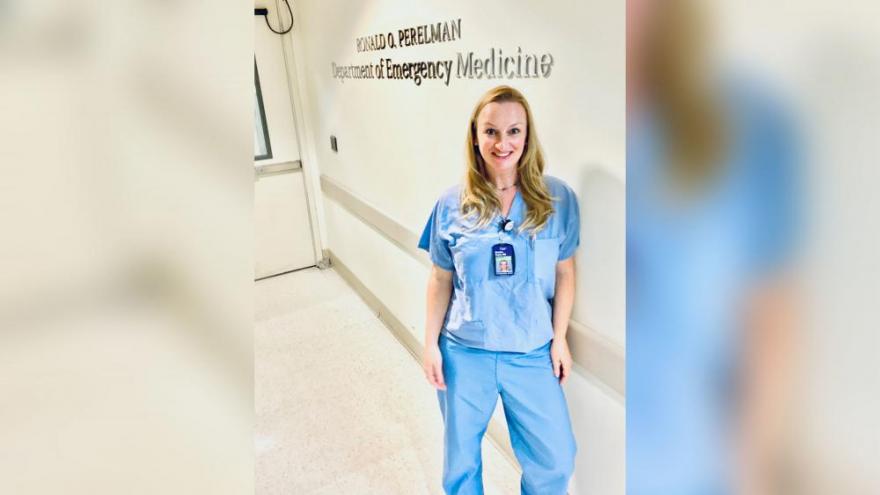 Deirdre Taylor met the NYC firefighter who saved her from a burning building decades ago.

(CNN) -- When Deirdre Taylor was preparing to leave her Virginia home to fight Covid-19 in New York on the front lines, she made sure to pack a possession that she held dear for over three decades: a front-page newspaper article.

But this wasn't just any newspaper article. It was an article documenting Taylor's rescue from a burning New York City apartment by a firefighter in 1983. She was only 4 years old at the time.

The picture on the front-page article shows a young Taylor with the man who saved her, Eugene Pugliese.

"I always knew I came close to losing my life that day," Taylor told CNN. "Without him, I wouldn't be here. I had a second chance at life, thanks to him."

Today, Taylor, 40, is an emergency room nurse who lives in Alexandria, Virginia with her husband and two kids. Ever since the incident, she wondered what became of the firefighter who saved her, coming up empty when she searched for him online. Ready to spend two months helping in the fight against Covid-19 at NYU Langone Hospital in Brooklyn, Taylor saw this as an opportunity to finally find him.

During one of her shifts, Taylor told a firefighter her story. He called the current captain of FDNY Ladder 20 in Manhattan, who knew exactly who Taylor was looking for.

Taylor gave Pugliese a call right after her shift and was very happy to hear his voice on the other end.

"I wondered about him on 9/11 and hoped I would get the chance to thank him, and I finally did," said Taylor.

Now 75 years old, Pugliese was "on cloud nine" when he got the call from Taylor on Friday.

"The two of us just sat there crying on the phone," the Spring Lake, New Jersey resident told CNN, adding that he's had the same article framed on his wall for 25 years now. "She turned out to be a remarkable woman with a magnificent life."

While Taylor only remembers bits and pieces of what happened on that December day in 1983, Pugliese, who retired 24 years ago, remembers it vividly.

Pugliese was in the SoHo neighborhood of Manhattan checking water pipes when he was approached by a man who said there was a fire down the block. Pugliese followed the man to a building of loft apartments where he noticed smoke coming out of a sixth floor unit.

Upon entering the smoky apartment, Pugliese noticed and rescued a woman who then said her child was inside the apartment.

"She kept screaming, 'My baby!' so I went back in and found a young girl who was unconscious," said Pugliese, who then gave her mouth-to-mouth resuscitation until she became conscious.

"I didn't see her ever again after that, but I always wondered about her," said Pugliese, who received the Walter Scott Medal for Valor for his rescue of Taylor.

A reunion and a lot in common

Pugliese and Taylor found out they had a lot in common when they reconnected.

Taylor enlisted in the US Army on her 17th birthday, eventually serving in the National Guard as a helicopter pilot before she left to start a family and study to become a nurse. Before Pugliese became a firefighter, he served as a sergeant in the Marine Corps where he fought in the Vietnam War.

"On top of that, we're both die-hard Yankees fans!" said Taylor

Taylor and Pugliese have spoken twice since reconnecting on Friday and hope to meet once it's safe to do so, preferably at a Yankees game.

"I hope to meet her soon, maybe later this summer," said Pugliese. "I'd love to meet her two children and go to a Yankees game together."