A police shooting delayed this Black college's graduation in 1970. Now, those students finally got their ceremony -- and an apology 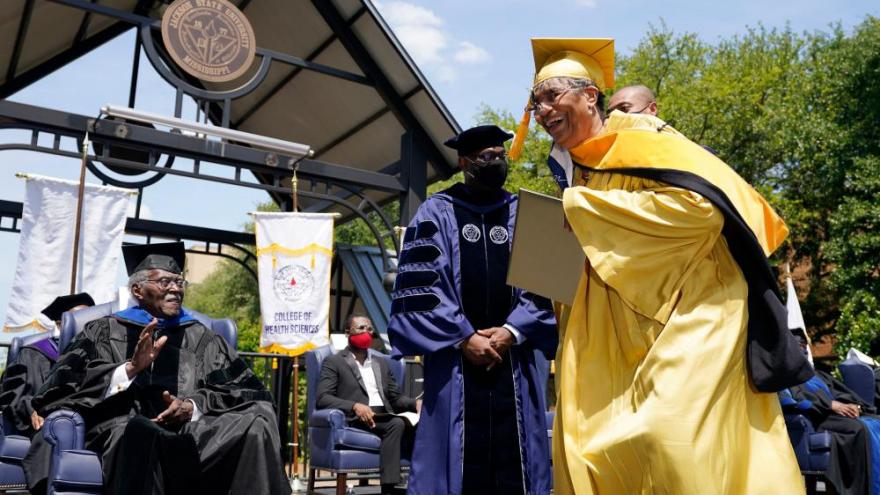 A former student at Jackson State laughs after being handed a diploma during Saturday's graduation ceremony.

(CNN) -- The class of 1970 at Jackson State University in Mississippi finally got to turn their tassels, over 50 years after their initial ceremony was delayed by a police shooting that left a dozen injured and two students dead.

In May 1970, two students were killed and 12 were wounded when local law enforcement fired about 500 rounds into a women's dormitory on Jackson State's campus, in a shooting that lasted less than 30 seconds, the university said. No police officer was held accountable, the university said.

The incident occurred over mounting tension regarding White supremacist violence and harassment toward students at the historically Black university's campus. Though police stated they shot in response to sniper fire, a federal investigation did not find evidence of anyone shooting from the locations police targeted with their weapons.

After the shooting, the campus was shut down and the graduation ceremony for the class of 1970 was canceled.

But on Saturday, 74 of those Jackson State University graduates -- some of whom are in their late 60s and 70s -- wore special golden robes and at last walked across the graduation stage to receive their diplomas.

The ceremony was originally scheduled for last year, on the 50th anniversary of the shooting, but was canceled due to Covid-19.

Jackson Mayor Chokwe Antar Lumumba, who spoke at the ceremony, apologized to the families of those that were killed, calling it "long-overdue."

"As James Baldwin once wrote, 'When we cannot tell the truth about our past, we become trapped in it,'" he continued. "I believe as a city we must publicly atone for the sins of our past and proclaim a new identity of dignity, equity and justice."

Jackson State University did not immediately respond to CNN's request for comment.