A rare fire tornado is spotted near a blaze in California 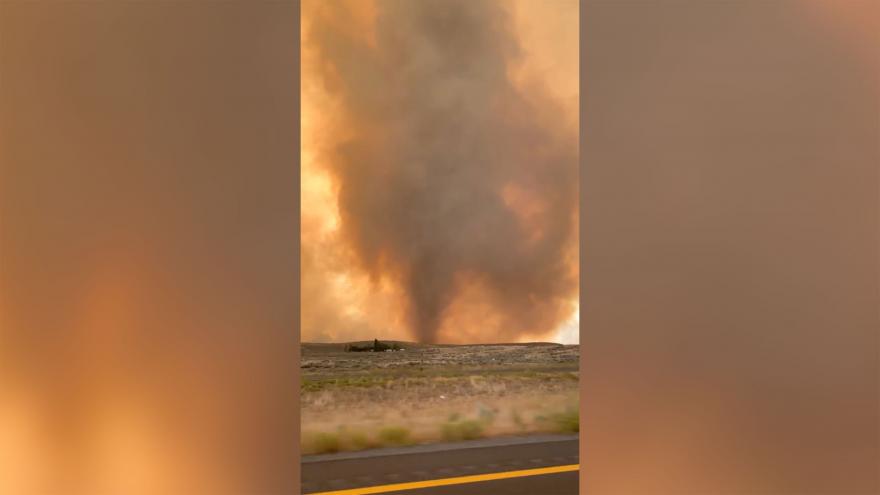 (CNN) -- 2020 has reached into its bag of tricks again and tossed out another surprise -- this time in the form of a swirling fire. Or as meteorologists call it, a firenado -- short for fire tornado.

The rare and fiery tornado was spotted Saturday near a fire in California. The National Weather Service Office issued a tornado warning for a pyrocumulonimbus cloud that formed by the Loyalton Fire, saying it was "capable of producing a fire-induced tornado and outflow winds in excess of 60 mph," CNN meteorologist Haley Brink said.

A pyrocumulonimbus cloud forms above intense rising heat, typically from a fire or volcano. Fire tornadoes are created when the rising heat from a fire pulls in smoke, fire and dirt, creating a rotation vortex above the blaze, Brink said.

Fire tornadoes can be massive and deadly. In 2018, one claimed the lives of a firefighter and bulldozer driver battling the Carr Fire. When the National Weather Service surveyed the damage on that firenado, it determined it was equivalent to an EF-3 tornado with winds in excess of 143 mph.

Officials in California, Oregon and Colorado are battling a series of wildfires that have collectively torched more than 100,000 acres -- and things could get worse with intense heat descending on much of the US.

The Loyalton Fire has burned 20,000 acres and was 5% contained by early Sunday. It's burning east of the town of Loyalton.