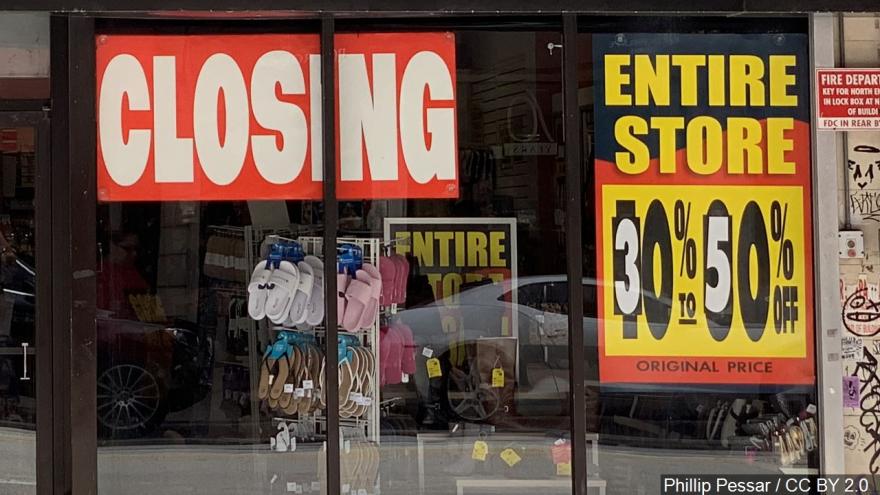 (CNN) -- As many as 25,000 retail stores in the United States are expected to permanently close this year as consumer demand for discretionary items stalls and more people shift to online shopping, according to a firm that tracks the industry.

So far in 2020, more than 4,000 stores have said they will permanently close, according to a report released Tuesday by Coresight Research, a retail research and advisory firm. It anticipates closures will snowball and set a new annual record this year, breaking last year's record 9,302 closures tracked by the firm.

Retailers have been slammed by the coronavirus pandemic and recession. Pier 1 Imports, JCPenney and Tuesday Morning, which have all filed for bankruptcy, have announced intentions to close hundreds of stores.GNC and Victoria's Secret are closing hundreds more.

A range of forces that were present before the pandemic are driving up closures, including unsustainable debt levels and the continued shift to online shopping. Then came the economic shock from the recession, Coresight said.

Consumer confidence and demand will stall in the coming months, sparking additional closings, Coresight predicts. The firm said there will be a "major uptick" in store closings because consumer demand for discretionary items will be "below normal" for an extended period.

"Retailers that were struggling to stay in business pre-crisis are unlikely to have the wherewithal to stay the course on the road to recovery," Coresight said.

More than half of the store closures are expected to come in malls. Indoor shopping malls have been struggling in recent years amid declining foot traffic and fierce competition online.

Malls that lose an anchor store are likely may have trouble keeping its remaining tenants, creating "a ripple effect that spells bad news for malls," Coresight said.Some stores may enter into "co-tenancy clauses" that allow them to pay lower rent or break their leases if an anchor tenant leaves, Coresight predicted.

But that came after retailers made steep job cuts in March and April, as clothingchains, department stores, sporting and home goods' chains and others temporarily shut stores.

Overall, retailers have announced the second-highest number of job cuts this year across all sectors, behind the entertainment and leisure industry, according to Challenger, Gray & Christmas, an outplacement firm. More than 150,000 retail workers have been laid off so far this year, according to the firm.