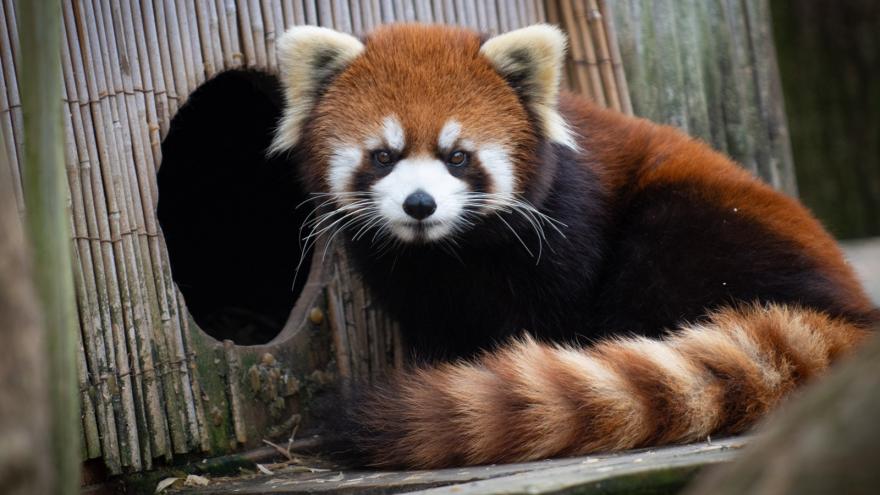 (CNN) -- There may be a red panda hiding up in a tree somewhere in Columbus, Ohio.

One of the diminutive, raccoon-like creatures that lives at the Columbus Zoo and Aquarium went missing this week, the zoo announced Wednesday. The zookeepers who care for her suspect she'll return on her own since she recently gave birth to two cubs who are still nursing.

The red panda, a 2-year-old named Kora, according to the Columbus Dispatch, was last seen in her habitat on Tuesday. Since then, zoo staff have conducted an "extensive search in the dense vegetation" near her habitat in the zoo's Asian wing, meant to replicate her native bamboo forest habitat. Security footage hasn't clued in her keepers on her whereabouts, though, so the search continues, the zoo said.

The male red panda who shares her enclosure is secure, the zoo said, though keepers have trimmed an area of sagging tree branches weighed down by recent rain.

Rain has played a part in the previous escape of a red panda: In 2013, a young red panda named Rusty escaped his enclosure at Washington's National Zoo and made it a half-mile away until he was recovered the same day. Zookeepers believe he escaped through the tree canopy in his enclosure, which sagged during the rain.

If Kora did manage to find her way out of the zoo, she's not a threat to the public, the zoo said -- red pandas are gentle creatures that mostly sleep in trees during the day.

Though her keepers believe she's likely near the zoo, they ask that any Columbus residents who happen to spot her nearby do not approach her, as she's quite shy and could be easily spooked. Instead, the zoo asks that spotters call Security Dispatch to come pick her up at 614-582-1844.

If Kora doesn't quickly return, keepers are prepared to care for her nursing cubs, the zoo said.

CNN has reached out to the Columbus Zoo for more information about Kora's disappearance and is waiting to hear back.

Red pandas aren't pandas at all, though they're thought to be related to the giant pandas they share their dense bamboo forest with in central and southwest Asia. But red pandas belong to their own unique family, separate from raccoons (though they bear a striking resemblance).

The creatures with the striped red tails are considered endangered largely due to habitat loss, according to the International Union for the Conservation of Nature.